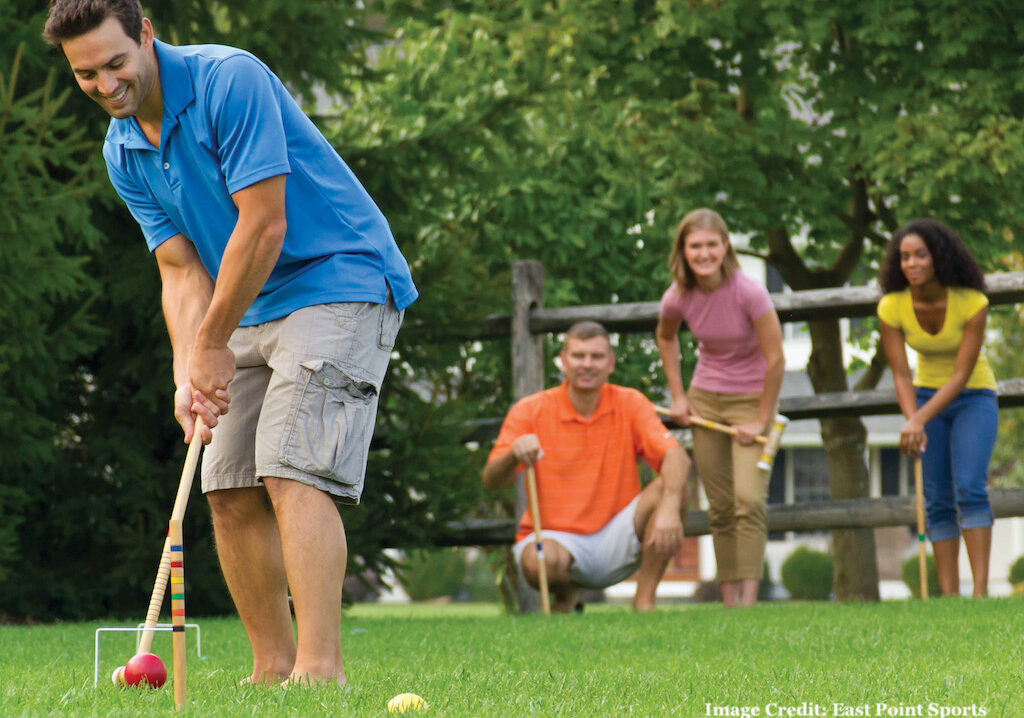 Croquet and golf both involve hitting a ball from place to place with a club or a mallet.  The difference between them is that golf uses a lot more reserved space and takes a lot more time.

Last weekend, for the first time in a long time, I played croquet.  Despite its French sounding name, it is anything but a high-class expensive sport.  A pattern of arches, called wickets, is set up on a lawn.  A stick is pounded into the ground behind the farthest wicket.  If, in going through that wicket, you hit that stick, you are out.  Every time you hit the ball through the wicket in the right direction, you get another stroke, and every time you hit the ball of another player, you get another stroke.  Wooden mallets are used instead of clubs.  And you only need one.

You will note some very broad similarities to golf.  And the main differences between the two have to do with conspicuous waste – four hours instead of one to do 18 holes, a large expanse of rather valuable real estate instead of one small yard, the necessity of a large selection of clubs instead of just one mallet, and the utility of a cart or a caddy.

To explain the usefulness of conspicuous waste, we go to Thorstein Veblen, whose famous tome Theory of the Leisure Class came out in 1899.  His argument was that the wealthy and powerful liked to show off their power by owning or doing things that demonstrated they could waste time or money on useless things.  In elegant women’s dress, or even men’s, a person could not do much useful sweaty labor.  Similar considerations applied to many of the features of their houses.  The large lawn may have resembled a grazing space, but no animals grazed in it.  Golf uses a large amount of land, which is a beautiful greenbelt but is not usable for anything else.  One exception may be at St. Andrews Old Course in Scotland, where they close the course on Sunday and open it for picnicking!

Even some of the healthier habits of the upper-middle class show signs of ‘conspicuous waste’.  The fitness craze is a lot healthier than such things as suntanning, which used to be the fashion [though a suntan makes a ‘dad bod’ look better].  So in the long term it is a good thing.  But in the short run, very few of the people populating our gyms have jobs in which the abilities to bench press 135 pounds or run for a long time at high speed are particularly useful.  Fitness, then, for most of us, shows that we have a life outside our work and time for these activities.  ‘Working out’ is indeed usually good for one’s health.  But sometimes the obsession with fitness, health, and sports can crowd out our intellectual and cultural life and, yes, for some, even the spiritual.  See my old post “Why There’s Little Intellectual Life in Orange County.”

It is sad, in a way, that being thin has become a sign of affluence in our culture!  There actually was a time, and no doubt it is still true in many around the world, when being round and plump indicated the blessing of abundant food and drink; and perhaps in such places, playing croquet still represents ‘just enough’ prosperity.