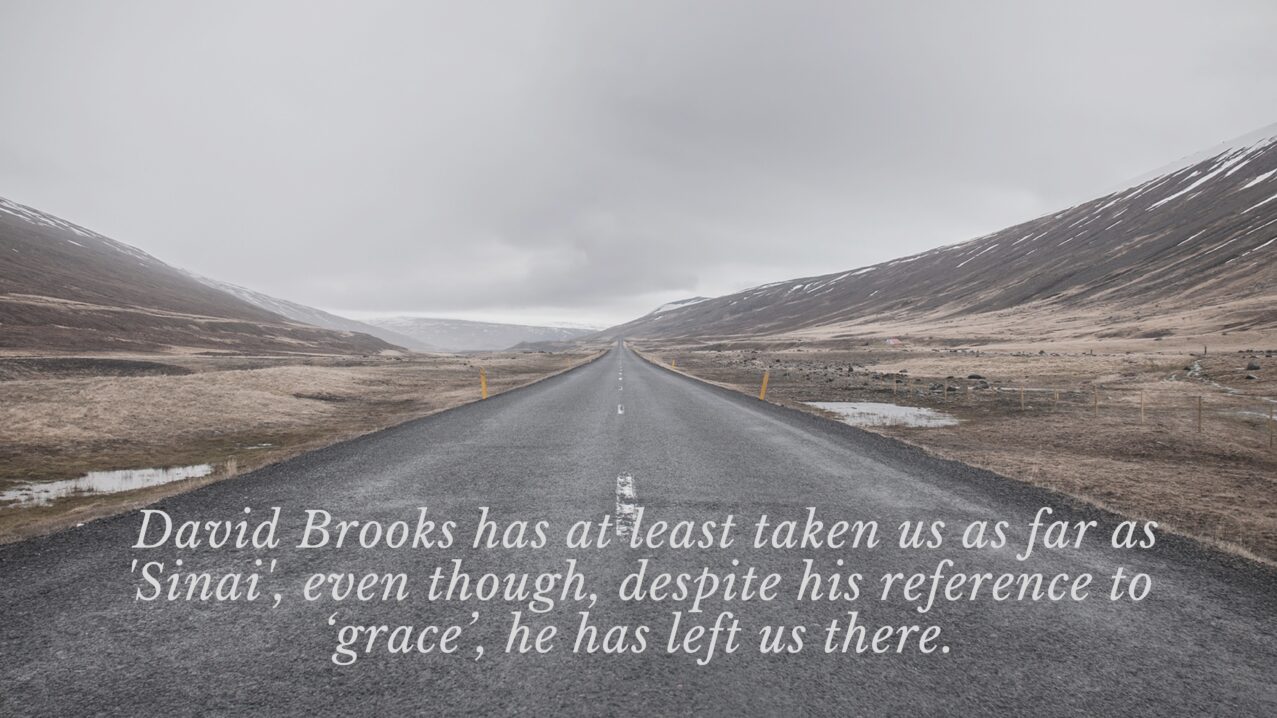 David Brooks, in his recent book, The Road to Character, makes a distinction between two kinds of virtues and tells us we need to be more concerned about ‘legacy virtues’ and not just the ‘résumé virtues’ that give us success in this life.  But, as a Jewish convert to Christianity, he stops just short of the Gospel.

In his 2015 book, The Road to Character, David Brooks has given us some moral biographical sketches of an interesting set of personalities.  These range from Eisenhower and General George C. Marshall to the little-known civil rights activist A. Philip Randolph and women such as Dorothy Day and George Eliot; even including St. Augustine and his mother, St. Monica.  These all helped me learn interesting things about those people.

Brooks’s fundamental assumption, which he derived in 1965 from a rabbi named Joseph Soloveitchik, is that we all have two Adams, which he calls Adam I and Adam II. 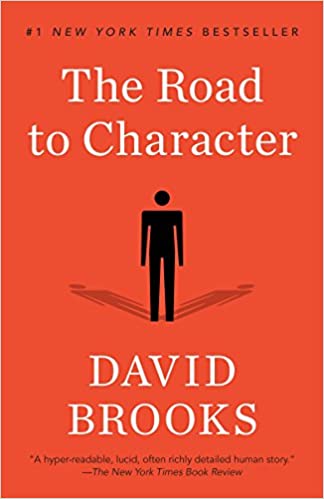 I might mention here that the late Dallas Willard used to speak of a “drive to significance,” a God-given part of human nature that was not necessarily a sin, though it easily could be turned to pride and other such sins.  [An easy analogy is the sex drive, which is not a sin, though it can be easily turned to adultery and fornication.]

Brooks draws another major distinction between ‘résumé virtues‘, the sort of virtues you would want to advertise and have a reputation for to get a good job or some other worldly position, and ‘eulogy virtues’, the good things that would matter to people after you are dead.  Now many of the ‘résumé virtues’ are actually virtues; at one point he speaks of self-control as a résumé virtue, and we know from Scripture that self-control is clearly a virtue.  But our broader culture promotes the ‘résumé virtues,’ he says, almost exclusively.

Brooks heard on NPR a broadcast of “Command Performance,” a radio show for the troops in World War II.  The date was critical:  August 15, 1945, was the day after Japan’s surrender was announced.  Stars such as “Frank Sinatra, Marlene Dietrich, Cary Grant, Bette Davis, and many others” appeared.  “But the most striking feature of the show was its tone of self-effacement and humility.”  Bing Crosby, for example: “Well, it looks like this is it . . . I guess all anybody can do is thank God it’s over . . . Today, though, our deep-down feeling is one of humility.”

A letter was read from the late Ernie Pyle, anticipating victory [the tide had turned in November 1942]:  “We did not win [the war] because destiny created us better than all other people.  I hope that in victory we are more grateful than proud.” [p. 3].

Of course, Brooks concedes that the revelations of the atomic bomb, nine and six days before, may have had a humbling effect.  But later, after Brooks saw a football player tackled–a two-yard gain for the defense–and the tackler did a little victory dance.  Brooks declared,

This little contrast set off a chain of thoughts in my mind.  It occurred to me that this shift might symbolize a shift in culture, a shift from a culture of self-effacement that says, “Nobody’s better than me, but I’m no better than anyone else,” to a culture of self-promotion that says, “Recognize my accomplishments; I’m pretty special.”  That contrast, while nothing much in itself, was like a doorway into the different ways it is possible to live in this world [p. 3-4].

I might wish to correct Brooks here by an insight from C. S. Lewis’s “Screwtape Proposes a Toast,” paraphrased: We are all worse than others about a lot of things, and we are mostly all better than others about some other things.  But still . . .

My poor generation, the Baby Boomers, gets blamed for all this.  But no.

The shift, Brooks informs us, comes shortly after the broadcast of 1945!   The very next year Rabbi Joshua L. Liebman declared, in a best seller called Peace of Mind, “’love thyself properly . . . thou shalt not be afraid of thy hidden impulses . . . respect thyself . . . Trust thyself . . . I believe that man is infinitely potential, and that given the proper guidance there is hardly a task he cannot perform or a degree of mastery in work and love he cannot attain.” [p. 245].

In 1949, Harry Overstreet published The Mature Mind, declaring “those like Saint Augustine who emphasized human sinfulness had ‘denied to our species the healthy blessing of self-respect’”–this is almost 20 years before Robert Schuller.  Then in 1952 came the most notorious tome of all, The Power of Positive Thinking, by Norman Vincent Peale.  These books were not read by the Boomers, but by their parents, the so-called “Greatest Generation.”

Francis Schaeffer would win the hearts of Boomers by pointing out that the majority of their parents were ‘plastic’ and really had only two real ultimate values:  ‘affluence’ and ‘personal peace.’  I don’t know if Brooks has ever read Schaeffer, but he makes a similar point.

Brooks does concede that there are some advantages to this new culture of ‘pride and self-esteem.’

The shift in the 1950s and 1960s to a culture that put more emphasis on pride and self-esteem had many positive effects; it helped correct some deep social injustices.  Up until those years, many social groups, notably women, minorities, and the poor, had received messages of inferiority and humiliation. They were taught to think too lowly of themselves.  The culture of self-esteem encouraged members of these oppressed groups to believe in themselves, to raise their sights and aspirations. [p 247].

But he goes back to his criticism:

In this ethos, sin is not found in your individual self; it is found in the external structures of society – in racism, inequality, and oppression.  To improve yourself, you have to be taught to love yourself, to be true to yourself, not to doubt yourself and struggle against yourself. [p 249].

I will add for myself that the most balanced argument ever made about this self- esteem issue in the 20th century, and as far as I know, in the 21st, is the essay, “Two Ways with the Self,” in C. S. Lewis’s anthology God in the Dock.

While most of the aspects of this culture originated before the present rise of social media, Brooks affirms technology is contributing in three ways:

In the face of it, Brooks concludes with 15 suggestions that sound very much like Christian thinking.  One of them is, “In the end, we are all saved by grace.” [p 264].  I am very disappointed that he does not bring up what we expect him to bring up:  the death and resurrection of Christ.  Perhaps he wanted this book to be taken seriously by the non-Christian public.  Or perhaps he wanted not to offend people of his Jewish background.  Dietrich Bonhoeffer’s ‘cheap grace,’ and Dallas Willard’s ‘gospel of sin management,’ ideas that use the Cross to justify not seeking holiness, are bad enough.  But a gospel with no Cross of Christ at all is even cheaper grace, and many in our society have swallowed it.  For me, knowing that the least of my sins drove God the Son to the Cross makes me take the whole matter more seriously than I did before I came to Christ at age 23.  On the other hand, as C. S. Lewis tells us, “the road to the Promised Land leads past Sinai.” [Problem of Pain, Harper Collins (2001), p. 59].  Brooks has at least taken us as far as ‘Sinai’, even though, despite his reference to ‘grace’, he has left us there.  We can only pray that his readers, as they battle to improve their character under the eye of a holy God, may take the final step into the Kingdom.