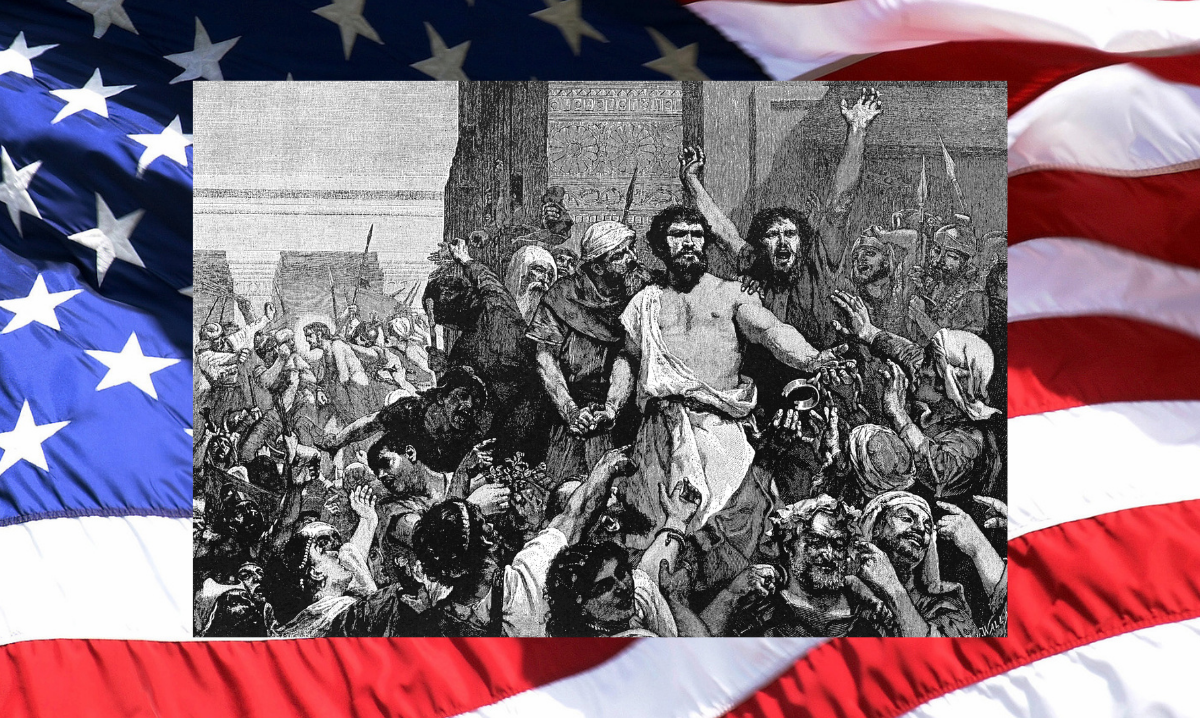 In exchanging Jesus for Barabbas, the people chose a practical terrorist over The One who did not seem likely to fulfill their political dreams any time soon.

The big news in Jerusalem the night of that first long-ago Good Friday, [and Passover eve] was probably that the popular terrorist and guerrilla warrior Barabbas had just been released from prison.

Those of us of a certain age can remember such figures as Che Guevara and Yasser Arafat.  To a large number of people, these were heroes.  It is ironic that the attitudes of a lot of Jewish people towards the Roman Empire were similar to the attitudes of the Palestinians, who now occupy much of the same territory, toward today’s ‘Jewish’ state!

Anyhow, it seems that the Sadducees, who wanted to get along with the Romans, thought Jesus was a troublemaker.  So they decided for the moment to make an ad hoc alliance with the Zealots, the faction with some sympathy to the rebels.  Jesus was claiming to be a king all right, but to the disappointment of the Zealots and a lot of the public, a king whose ‘kingdom was not of this world’ but of supernatural origin – one that stood above the Roman Empire and was not planning to replace it at that time.

So, the Sadducees were able to pack the courtroom with a bunch of Zealots to shout, ‘We have no king but Caesar’ when Caesar was what they really hated – all because, I think, they could get Barabbas freed.

Matthew, and only Matthew, informs us that Barabbas’s first name was also Jesus!  The form ‘Jesus’ as we have it, is the Greek rendering of ‘Yehoshua’ or Joshua, and our Lord was not the only person to bear what we have come to think of as the beautiful Name.

Barabbas was not going to give them a magic welfare state by multiplying loaves and fishes.  It is noteworthy that after Jesus did this, He had to flee to the hills and walk across the lake to get away from those who were threatening to make Him king by force.  But now it was looking like Barabbas was going to be a more practical solution to the problem of getting political independence, and the mob took that option.  So Jesus had to be disposed of, if that were the choice.

I could not help thinking of Donald Trump in this context.  The ‘Christian nationalists’ who loved Trump still valued Jesus for the eternal salvation He supposedly had for them, but Trump was going to give them what they wanted in the here and now.  And I must demur here.  I think that about half of the ‘Evangelicals’ who voted for Trump, and maybe more [there’s never been a real poll taken on this], were not Trump idolaters but ‘hardly ever Trump’ or ‘Trump the lesser evil’ voters.  I suppose the real test would have been how they voted back in the 2016 primaries when the choice was between him and a host of other Republicans.

Nevertheless, whether it comes from the left or the right of the political spectrum, the Barabbas temptation is a perennial one.  We Christians must continually guard our hearts against it.

Image source: nara.getarchive.net and “Give us Barabbas!” from The Bible and Its Story Taught by One Thousand Picture Lessons (1910).