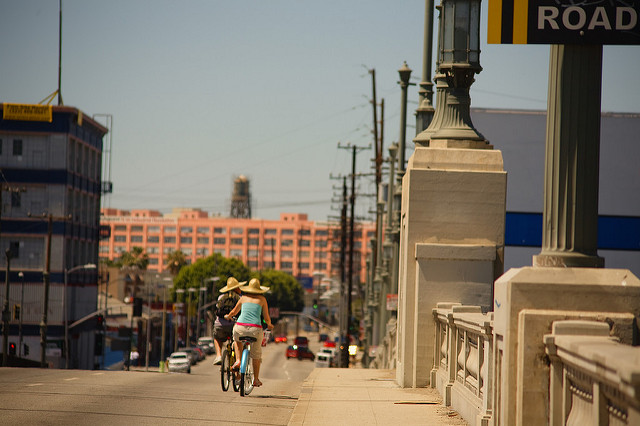 A recent Los Angeles Times article chronicled a showdown between drivers and bicyclists, inspired by the installation of bike lanes and — more significantly — the reduction of auto traffic lanes on a San Fernando Valley boulevard. The change was clearly intended to encourage cyclists, but I had to wonder: Which ones? In a city as diverse as Los Angeles, even the bike riders are divided, loosely, into different tribes.

On a San Andreas Fault tour, on the San Francisco Peninsula skirting Silicon Valley, my friends and I passed large numbers of people riding back and forth on bicycles. They had brought their bicycles up into the Santa Cruz Mountains in the backs of their SUVs, and were riding back and forth, exercising their legs. Most of them were dressed in bicycle helmets, and costumes that looked like a cross between a surfer’s short wetsuit and a ballet tutu. It did not seem to me that this sort of activity was really going to replace the automobile for any serious purpose, and anyway, they were not commuting..

In my own Orange County “paleo-urbanist” community we have the people of the helmets and ballet tutus, who use the streets. But we also have regular folks, who dress in shorts and often T-shirts. These ordinary adults and children use the sidewalk, not the street. I hear that many parents forbid their kids to ride in the street, especially when the street is Pacific Coast Highway. It is actually, as I understand it, illegal to ride a bicycle on most sidewalks. It is also against the law to drive more than 65 miles per hour on the freeway, to drink alcohol if you’re under 21, or (at least till November) to possess or smoke marijuana. As the young folks like to say, Bwahaha.

I’ve heard about (I think there was an LA Times story some years ago) what I would like to call Los Midnight Riders – those who ride bicycles to work for economic reasons, not ecological ones, because they A) have jobs that don’t pay enough to support owning a car and B) have jobs with hours or locations that preclude using public transit; it either doesn’t run to where they’re going, or it shuts down long before they can go home. These people are the real bike commuters. They often cannot, alas, afford proper front and rear night lights, which makes them a hazard. And they live in parts of town that may not be the best equipped with bike lanes, bike lanes being a rather bourgeois-bohemian interest.

I taught myself to ride a bicycle at college when I was 21, not having had much opportunity or daring to learn earlier. There was a campus fad for bike riding at the time, but there were no ballet tutus or anything resembling them – ordinary shorts and the like were the costume for our rides. I felt incredibly self-righteous. For some time afterward I used the bicycle once in a while for local trips. But I did so less and less as time wore on. I still have a bicycle, and still use it occasionally, but bikes need to be kept in working order, and being of a certain age I fear I must confess that yes, yes, I do walk my bike up long or steep hills. I don’t wear a tutu, though when I get off a bike I often understand why other people do: My “privates” have gone to sleep, and when I dismount they begin to wake up with a tingling that is about as different as can be from titillation.

Will bicycles ever become a transit option for masses of commuters? Office dress and decorum has not yet deteriorated to the point where bicycle commuting will be practical without a locker room. One would arrive at the office a sweaty mess and need to shower and change, I’d think, which could be as much of a hassle as going to a health club, and just as time-consuming.

About a month from now I will be in Copenhagen. There, bike paths run between the street and the sidewalk, including right in front of hotels. Anyone getting out of a car must keep this in mind, for bicyclists are moving past at very high speeds! They seem to be dressed, for the most part, in long pants, and even in business suits. Not having spent a lot of time meeting with Danish bankers and lawyers, I don’t know whether or not they reek of sweat, or if their offices include huge locker rooms.

But three factors should be noted: A) Copenhagen is a very flat city, so a cyclist might not work up that much of a sweat, B) The weather is not very warm most of the time, so there’s less opportunity to work up a sweat anyway, and C) They’re Danish. I don’t know if they have different tribes of bicyclists, but they may have a different metabolism.