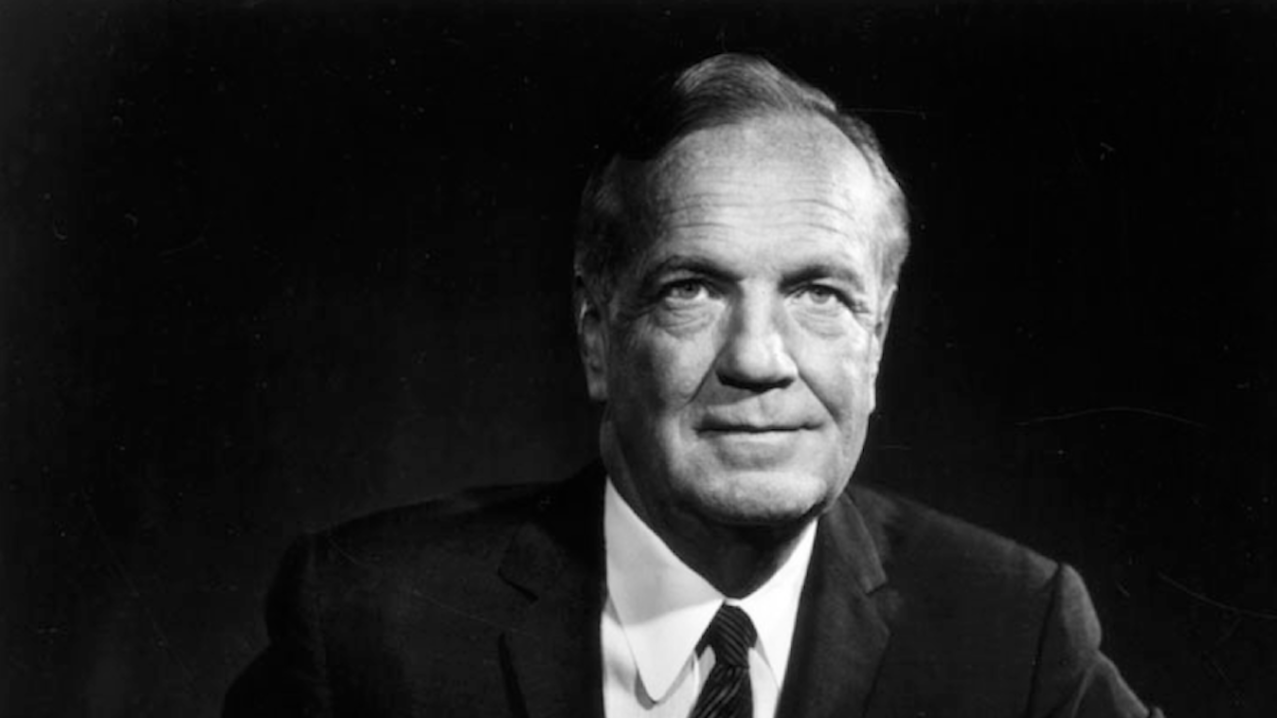 The “WWHD Conference — What Would Howard Ahmanson, Sr., Do?” — was held August 1, 2018, the year marking the 50th anniversary of my father’s death.  I decided I wanted to sponsor it, mostly to honor him.

In the tumultuous year of 1968, when Howard Sr. died, he owned Home Savings and Loan, the largest savings and loan company in America.  It was later renamed ‘Home Savings of America’.

This took place in a time during which the distinction between a ‘Savings and Loan’ and an ordinary bank was more tightly defined than it is today.  In 1968, savings and loans lent only on real estate and paid slightly higher rates than banks to their depositors.

In those days, my dad made loans to many people – loans that would enable them to buy their own single-family homes in Southern California.  When he died, the branches of Home Savings were confined to four Southern California counties.  Later on, the company went nationwide.  And finally, in 1998, the leadership of Home Savings sold the company to Washington Mutual, who ran it into the ground.

Subsequently, in the Crash of 2008, the remnants of Washington Mutual and Home Savings of America were swept up by Chase.

One indisputable fact is that a large number of the people to whom my father loaned money for home purchases would not be able to buy homes today.

That reality is what inspired the WWHD conference.

Our speakers explored Howard Sr’s legacy and tried to explain the changes in financing, both in society and in law, making housing out of reach for the very sort of people who were once Howard, Sr.’s primary customers.

I discovered, in a survey from the UCLA Luskin School, that “Los Angeles is now the metro area with the highest share of renters in the country at 52%.”  This fact is far removed from what Home Savings of America, and the other great savings and loans of the day, were trying to achieve.

As the Irish would say, “if my dad were alive he would turn over in his grave!”

I wanted to know what changed – another reason for the conference.  We have to consider our history.  As my friend John Perkins has often said, “We have to remember the past and give it dignity.”  I hope the conference made that possible.  Meanwhile, a few facts about my father’s history might be interesting.

Howard Sr. earned a Bachelor of Science degree in Economics in 1927, which I would argue is quite the equal of any MBA today.  I would also like to claim he was named after me but chronologically, given that he was born in 1906, it seems unlikely.

In his time, Howard Ahmanson, Sr., was known as an innovative business thinker.  Five years after he died, Home Savings was struggling with issues about going public [that was because of the Tax Reform Act of 1969, something that he could not have anticipated] and was dealing with the inflationary and unsettled environment of the day.

At that point, a writer at Forbes Magazine, in an article called, coincidentally, “What Would Howard Do?” charged that the management of H. F. Ahmanson and Company, the holding company of Home Savings, was trying to manage by holding seances and channeling him.  Desperate times demand desperate measures!  However, despite the troubles of the time, things were probably not that desperate.  Still, it’s quite true that my father was unique in his foresight and intuitive skills.

For example, in 1927, a foreclosure was sufficient to void any fire insurance, because it was believed that arsonists would target foreclosed houses.  Dad reasoned that lenders might actually have an incentive to be good stewards of foreclosed property.  So he decided to specialize in the business of fire insurance for houses in foreclosure.  And starting in 1929 there were suddenly a lot more of them!

Similarly, Dad thought that fire insurance companies of the time were overcharging residential customers and making discount deals with commercial clients.  So he decided to focus exclusively on residential business and to offer cheaper fire insurance to homeowners.

I didn’t inherit my father’s business talents, but I do think, by taking an interest in this issue, I may in some way have proved to be his son after all.

Personally, if he’d lived to see today’s financing disarray, I think he’d say, “Screw it!” and go back into the insurance companies. Insurance, by the way, had been his work for twenty years, before World War II.  In any case, that’s what I might do if I were in his position.  Perhaps it is impossible to run a savings and loan to a broad-based public anymore.

It’s also quite possible that he might come up with some ingenious solution that no one else has ever thought about.  These days, we call it ‘thinking outside the box’.  That’s exactly what Howard F. Ahmanson, Sr., did.

At the WWHD conference, some of our speakers, who know the history of Los Angeles well, told us just how far that statistic is from how Los Angeles was conceived 100 years ago.  A prognosticator would just as soon expect L.A. to become a city of long snowy winters.  In fact, Neil Diamond sang in an old song about L.A., “Palm trees grow, rents are low, and the feeling is laid back!”  Clearly, it is a very old song!

In the meantime, my main goal with the WWHD conference was to examine how we got from that long-ago world to where we are today.

The deepest takeaway for me was from William Fischel of Dartmouth.  He has written Zoning Rules!, The Homevoter Hypothesis, and Regulatory Takings.  These writings trace the history of the revolution in attitudes toward land use that has taken place in the last hundred years.

As Fischel spoke, he made two essential points.

First of all, he pointed out that my father might have invented home value insurance, something that Fischel has proposed, to insure against a drop in resale value of homes.  Whether they would pay out when the value dropped or when the home was sold was not clear, but I trust the latter.  It would seem to make more sense.  [Similarly, if the value goes up, I would prefer a profits tax on the sale rather than doing away with the well-known portion of Proposition 13 and having liquid taxes rise on an illiquid and non-income producing asset, which is what an owner-occupied home is.]

Fischel also said, with the Great Inflation of the 1970s, an event that shaped and perhaps corrupted Boomers’ spending habits, came a change in how people viewed homes.  Before that, he pointed out, there were plenty of good reasons to own a home, but a home was considered the equivalent of a ‘blue chip’ stock, like the old AT&T.

If home ownership was a wealth builder, it was because you were not throwing away money on rent [although you were, to a degree, on interest] and your equity was increasing over time.  But the effect of the inflation was to make people see a house as a ‘growth stock’ that should forever increase in value.  Consequently, people became more interested than ever in controlling their neighbors.

In the middle of the Great Inflation, another boost came with the Fair Credit Billing Act of 1974.  With this, two-income couples were given the right to use both incomes to outbid single-income couples for a finite stock of housing.  Before that, many middle-class households lived on one income.  After the Act, only the more affluent [assuming the wife didn’t want to work] could choose to do so.

Fischel’s Homevoter Hypothesis points out the concern of homeowners to control communities in order to protect their investment. It became acceptable in political discourse to talk about ‘protecting property values’.

Each of our other speakers added further perspective, both to the housing issue and to an emerging portrait of Howard Sr.  For example, Eric Abrahamson, who wrote his biography, Building Home, spoke of my father’s life history and innovation.

Adam Arenson documented the Millard Sheets’ mosaics associated with the Home Savings’ buildings; he actually preferred the designs of the Dick Diehl era, 1968-1995, to the ones before 1968!

Allan Carlson, the moderator of our panel discussion on “Home Ownership and the American Dream,” has written a number of books about the American family and the politics surrounding it, such as The American Way, Godly Seed, and Family Cycles.  Panelists included Brian Hanlon, Kristen Jeffers, Karla López del Rio, Manuel Pastor, Tim Piasky, and Karthick Ramakrishnan.

Joel Kotkin has written The Human City and The New Geography, giving us such wonderful words as ‘midopolis’, anything built between 1945 and 1970, and ‘nerdistan’, the favorite housing of professional and tech people.

Rick Cole, traveling knight errant and city manager of Santa Monica, and Kenneth Stahl, professor of law at Chapman University, addressed today’s land-use issues.  Cole suggested bipartisan solutions that were impressive; but he has no plans to actually run for office beyond the local level.  [Perhaps he’s sane.]

I’m thankful that T.j. Fuentes, representing the Millennial Generation, served as emcee of the proceedings.  He probably learned quite a bit himself about these matters.  He comes by his emcee talents naturally; his father, the late Tom Fuentes, was known as the Toastmaster General of Orange County.

I am grateful to all who attended.  And I believe that the gathering could not have been more timely.

The housing shortage is being recognized as California’s biggest and most serious problem.  Bills have been introduced in the Legislature and have gotten attention in the media that are split between NIMBY [Not In My Backyard] and YIMBY [Yes In My Back Yard – that’s a thing now].  It’s noteworthy that the split falls along very different lines than the national polarization between ‘Red’ and ‘Blue’.

Personally, I think the occasion was great fun.  I’ve argued that our view of local government – City Hall and the homeowners’ association – is our actual view of all government.  And that’s true regardless of our opinion about what the government in Washington D.C. should do.

Video of the WWHD conference sessions can be enjoyed at Vimeo.