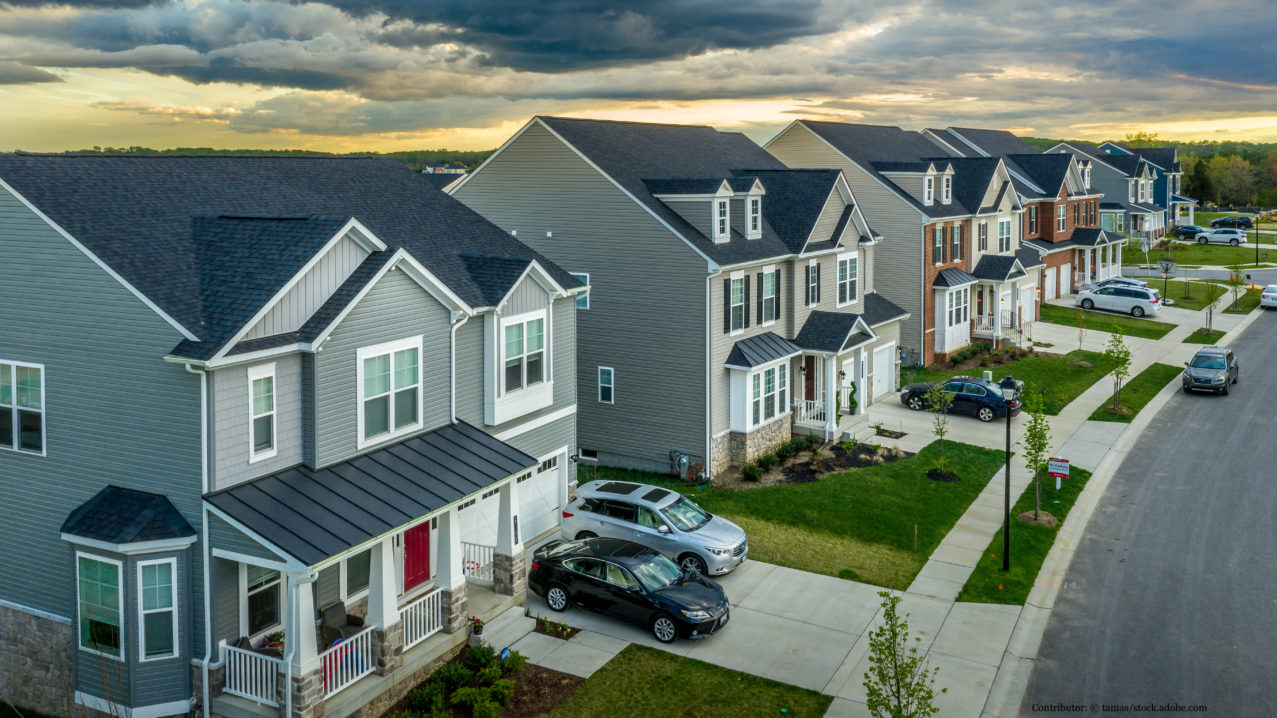 One of the classic books on the history of suburbia is Kenneth Jackson’s Crabgrass Frontier. It came out in 1985, two years before my personal favorite, Bourgeois Utopias, by Robert Fishman.  This book notice discusses Crabgrass Frontier in view of what we, or at least I, have learned in the last 35 years. 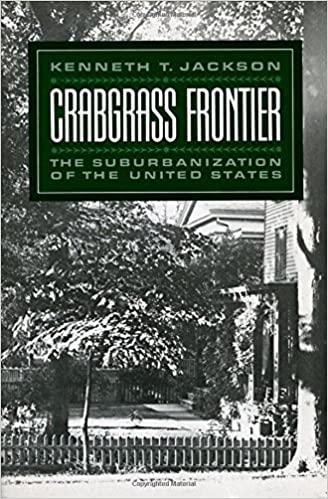 Jackson is more thorough, while Fishman’s publication lightly pursues the history of suburbia from seventeenth and eighteenth century English villas, through the Clapham Sect, on to Los Angeles [not exceptional today but was then ahead of the times] and finally to the modern boomburb or ‘edge city’.  This featured houses, stores, and offices, all the features that a traditional city boasts, but is designed around the automobile.  He also detours to Paris, which pioneered a very different model.

Jackson does not actually write about crabgrass.  As a native Californian, I’m not sure what crabgrass is, or why it’s a bad thing.  But ‘crabgrass’ was kind of a symbol for suburbia during the Compression years [1945-71] nationwide.  In fact, Allan Sherman who was kind of the Weird Al Yankovic of the early sixties, wrote  a song called “Here’s to the Crabgrass” in 1963.

Jackson explains that two tendencies were taking place in medieval and early modern Europe.  First, undesirable functions, like leather tanning and other smelly industrial works, were exported to just outside the walls.  On the other hand, the rich monopolized the most central portions of the city, and at the same time often had ‘country estates’ that were too far away, with their technology, to consider commuting as we know it.

Some years ago, on a visit to York, England, I discovered that the rich once liked to be in the dense city during the cold winter months.  In fact, after York became less strategic economically, one of the things that sustained it was that it functioned as a winter resort for the wealthy.  It is evidently more comfortable to be in the country when it’s hot, and in a dense city when it’s cold [Jackson does not take this into account].

The status of the city as a winter resort began to diminish when such places as the Mediterranean Rivieras, Florida, Pasadena and later Palm Springs and Scottsdale opened up other possibilities.  On the other hand, the invention of air conditioning made large swaths of the United States somewhat more tolerable in the hot months.

Meanwhile, it was actually the development of public transport that enabled greater dispersion; the ferry in New York City, the horse-drawn omnibus, later the horse-drawn streetcar or tram on tracks, and eventually the electric suburban or interurban railroad.  Certain suburbs were very popular, and a few inner cities had started to decrease in population by the time of the Civil War.  Later on, in the 1920s, the automobile began to make its breakthrough, moving well beyond its status as a toy of the rich in North America.  On the other hand, in Europe, this didn’t take place until after World War II.

The automobile changed everything.  It was now possible to fill in areas on the one map between the lines [although, admittedly, at less than approaching traditional urban density].  By the time of the Great Depression, Will Rogers declared that “America is the first nation to drive to the poorhouse in an automobile.”

It is an interesting fact that, in those days, immigrants were actually more likely to be homeowners than ‘old stock’.  There may well have been a lot of sweat equity involved, but they actually put a higher priority on ownership than, at least, the less affluent natives.

Then, beginning with the New Deal and continuing after the war, the Federal, as well as state and local governments, began assuming more responsibility for housing.  This took two paths.  First were the FHA, VA, and the Home Owners Loan Corporation, which dispersed whites [yes, they viewed blacks and ‘others’ as undesirable].  Second, Public Housing accommodated the poor and became ‘the projects’.  But they did not house as many blacks as were driven out by ‘urban renewal’ schemes, which ultimately became crony capitalist playthings and were labeled as ‘Negro removal’.  In fact, the dynamiting of Pruitt-Igoe in St Louis in 1971 was the point at which we stopped thinking of ‘the projects’ as the solution to housing problems.  Another thing that governments viewed as undesirable was buildings that had both retail or commercial space in them and residences, known in the trade as ‘mixed use’.

Reading Jackson’s book 35 years after it was written, I found it interesting to notice what he saw in 1985 and what he didn’t see. Though I don’t believe in establishing economic barriers by local public policy, it is a simple fact that affluent residents can pay more taxes to a city, while poorer ones make demands on city services and cannot afford the taxes to pay for them.  Three California cities – Fontana, Rialto, and Chula Vista – have adopted the strategy of building new ‘middle class’ homes.  These are residences that are hardly posh quarters, but in effect they are meant to subsidize their communities’ older parts.  Many others have not had this opportunity.  Ontario, for example, has invited industry.

Jackson sums up his perspective,

The positive result of this process is called `filtering’.  The construction of new housing in the suburbs puts competitive pressure on the older housing stock, depressing its price.  . . .   Thus, the typical model of urban growth in the United States has been the sequential reuse of housing by progressively lower-income households.  Were it not for the subdivisions of the periphery, the shelter available to the poor would be even more limited and expensive.

The negative results of the urban cycle are the stripped automobiles, burned-out buildings, boarded-up houses, rotting sewers, and glass-littered streets that are common in so many of America’s inner cities. . .  As one federal official noted:  “There are some parts of these cities so empty they look as though someone had dropped nerve gas.” [p 285]

The word ‘Gentrification’ actually appears in the book in one place, where Phase Ten of the cycle is labeled as “Urban Redevelopment or Gentrification.” [p 286].  The example Jackson gives of this, however, is Red Hook, Brooklyn.  “Now occupied mostly by baseball diamonds and soccer fields, it seems to be returning to its original function.” [p 287]

Jackson did not foresee the large-scale return of the less fertile affluent to the central city.  However, it does not seem that those same residents will necessarily stay there during their child-raising years:  Sex and the City, Fertility and the Suburbs.

And there are some provisions that could encourage some of these families to remain in the city.  These include better access to good schools [I would say mostly private and religious] through vouchers and tax credits, and a renewal of the commitment to public safety from crime that characterized the Giuliani era in some of our cities.  [In the era of De Blasio, some cities seem to be moving away from this commitment.]

The affordability issue was just beginning to show up at the time of Jackson’s writing.  He informs us,

Economic causes have been even more important than skin color in the suburbanization of the United States. Practically every adult American complains about the high cost of housing.  The impression of unaffordability is reinforced by television and newspaper commentators who regularly report that the American dream is moving out of reach.  In May, 1984, for example, the average price of a new, single-family home in the United States crossed the six-figure threshold for the first time.

The simple fact, however, is that the real cost of shelter in the United States has been relatively low and affordable in comparison with housing costs elsewhere in the world. [p 290]

Something Jackson completely neglects is the factor of the ‘favored quarter’.  This concept was popularized by Christopher Leinberger in a work called The Option of Urbanism, first edition 2007.  According to this theory, suburbia cannot be simply pictured as an affluent doughnut surrounding an inner-city hole.  Rather, the affluent people, businesses, homes, and offices head out of the central city in one specific direction, while suburban expansion in other directions is occupied by the much less affluent.  Here are some articles that refer to the concept of ‘favored quarter’ and some maps that illustrate this.  Los Angeles has shifted its Favored Quarter, actually twice.  The concept is very useful in predicting which suburbs various kinds of people will move to, where edge cities will spring up, and even which side of downtown will prosper the most.

Lastly, even though the doors had been open for twenty years, Jackson says nothing about mass immigration.  We have now reached a point where half the population of California and Texas is neither white nor black, and that has changed a lot of the racial dynamics.  Different cultures do things differently of course, but some people are afraid of ‘The Other’.  Some nativists are actually linking the continual growth of urban sprawl, and the upward pressure on prices, to immigration.

I wonder.  If these people had not come, would whites and blacks have fled California anyway, in the vast numbers they have?  If the immigrants had not come, would vast stretches of LA be vacant, like Detroit?  If they had not come, would housing be as expensive in so many areas as it now is?  Not having access to a parallel universe, I can’t answer.  But I do wonder.

One other interesting note.  Jackson writes in the shadow of the energy crisis of the 1970s, which was simultaneous with the Great Stagflation.  By 1985 the abolition of price controls had made energy and at least gasoline quite abundant, and was actually pushing people to flee Houston, if you can imagine such a thing.  But Jackson could see the ultimate finitude of fossil fuels, and forecast that the suburban order would start to fade away because of it. Fracking has postponed that, but in the long run we will be, in my opinion, finding alternatives.  But it is striking to me that what was said about the ‘energy crisis’ then, and what is said about ‘climate change’ now, are strikingly similar. Before we started worrying about carbon dioxide, there was a concern about fossil fuels, but it concerned not carbon dioxide, but the fact that they were finite, whereas things that grow, if properly handled, were not.  [The passenger pigeon, in 1914, turned out to be not very renewable, for in that year the last one died.].  The more things change, the more they remain the same.