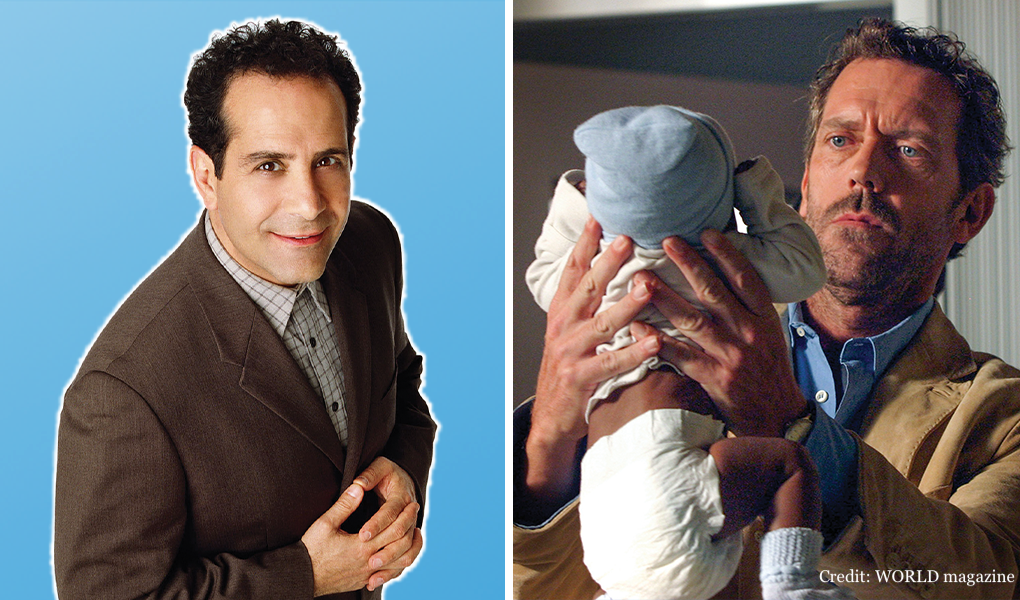 Looking for a break from wondering what the world will be like when the lockdown is over?  Two multiple-award-winning TV series from the dawn of this millennium might give you the diversion you need.

Why all the attention?  The awards are a clue, but the deeper reason is the two strong, complicated characters at their core.  Both Monk and House are idiosyncratic, wounded healers.  Both have a gift, the one to solve unsolvable murder cases, the other to solve the most mysterious medical ones.  Similar but very different.

What is it about Adrian Monk that draws viewers to him?  A former San Francisco Police detective, Monk lost his badge when he broke down after his wife Trudy was killed in a car bombing.  Until the end of the series, this is the one case Monk cannot solve.

Monk is afraid of 312 things from milk, harmonicas, heights, and tight spaces to ladybugs, messes, nudity, and foods touching on his plate.  Germs may be among the most frightening.  Every time Monk touches anything, he needs a wipe.

Still, his idea of propriety is a little skewed.  He only provides one beer each for the guests at his beloved friend Captain Leland Stottlemeyer’s bachelor party.  If that wasn’t enough to dampen the fun, his best man’s speech focuses on the captain’s divorce from his first wife and the fact that his last girlfriend is now in jail for murder.  At that the guests think it’s time to go.

What keeps us watching?  Shalhoub, for one, whose acting masterfully balances obsessive compulsive disorder with the pain of the loss of a beloved wife and, with it, the loss of a place in the world.  And, Monk himself can be endearing.

Yes, he is a cheapskate, constantly forgetting to pay his assistant.  He is always cleaning.  He cuts his food into squares.  And, just when someone tells him something personal, he immediately focuses on himself.  Annoying.  But, when Monk is deathly ill, we can’t help but smile, watching him separate his pills into red, yellow, and blue before he can take them.  And, he is outraged by murder; his goal is to stop people who do it from doing it again.  Then, when everyone least expects it, he does something, yes, endearing.

So, what draws us to House?  He is the scary brilliant head of the diagnostics department, created especially for him, at a private hospital in a town that seems a lot like Princeton, New Jersey.  He is alone.  A misdiagnosis left him with never-ending, excruciating pain that gives him reason for a Vicodin addiction and a very short temper.

But he loves solving puzzles, and there is no greater puzzle than finding the diagnosis that can save a person’s life.  Based on innovative and controversial insights, however, House’s diagnostic hypotheses often challenge the rules of hospital procedure.  His boss, Dean of Medicine Lisa Cuddy, keeps him on because, more often than not, he gets it right.

And, House can be almost human.  In one episode House assists at an in utero surgery for a baby boy with lesions on his lungs.  As House drains fluid from the cavity, the baby stretches up his tiny hand to clasp House’s giant finger.   House stares, mesmerized, tender.  Those moments give you hope that he can change.

But, House doesn’t believe in transformation.  His motto is: ‘Everybody lies’.  Even himself.  He lambasts patients even when he is curing them.  Most of all, he lambasts the very idea of God.  There are characters who believe, but their arguments come either from their experience or their need – they just can’t live without God.  House pulverizes their feeble pleas with hard, cold, merciless logic.  He may be the most unhappy character in the show, but he is also the smartest.  So, we can only conclude that happiness would be to be able to face a world without God without being angry about it.

Why keep watching?  Again, Laurie’s acting takes you inside not only House’s impatience, anger, and frustration with himself and everyone around him, but also his obvious need for and yet terrible fear of love.

House takes pleasure in making other people squirm.  Every time he gets close to dealing with his demons, he chooses not to.  He admits himself to a rehab clinic but later ditches his psychiatrist when he disagrees with him.  He sours his long-hoped-for relationship with Cuddy because his fear of losing her keeps him from standing by her in the face of a cancer scare.  Finally, so angry at her for ending the relationship and trying to start a new life, he drives his car into her dining room window.  That lands him in jail.

Monk is a show about a troubled person who wants to make the world right and wants to be a better person.  Not only that, he tries against great odds to do it.  House, on the other hand, is a man angry at a father, who wasn’t his biological father, for being hard on him.  He is angry about his leg.  Most of all, he is angry at the universe for not making life easier.  The show is filled with references to God, all of which House regularly shouts down.  ‘Everybody lies.’

In the end, Monk finds resolution.  The show is a classic comedy.  The man who ordered the deaths of his beloved wife Trudy and three other people is at last revealed.  The villain kills himself when he is cornered. But all the good people in Monk’s orbit – the nurse, the assistant, the captain, the lieutenant – all find true love.  And, Monk is back at work with the captain and his assistant.

House, on the other hand, is a tragic anti-hero.  His one friend, the oncologist Dr. James Wilson is diagnosed with terminal cancer.  When it’s clear nothing will help, House fakes his own death and asks Wilson to meet him.  House’s gift for diagnosis matters not at all, he’s leaving medicine behind.  Instead, he buys two motorcycles.  The two will ride across the country until Wilson is too sick to go on.  House will care for him until he dies.  And, then???  Nothing.