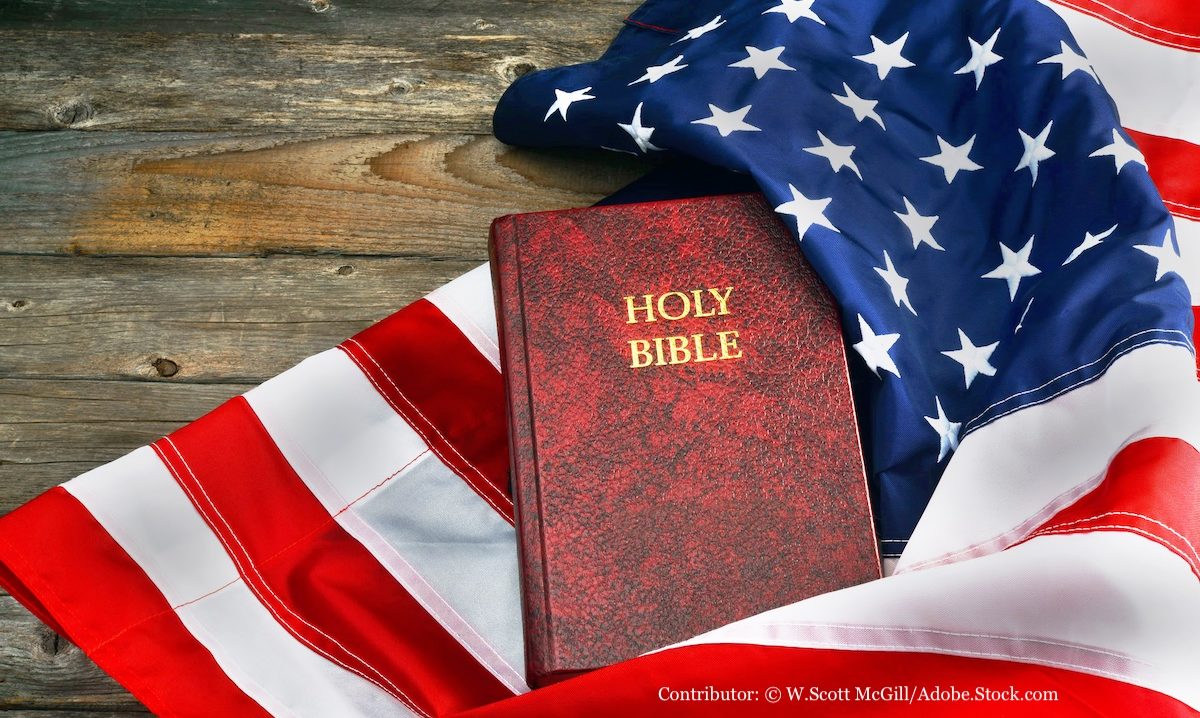 What, precisely, is a Christian Nationalist?  Someone who holds that their nation-state, or their cultural group, is in a special relationship with Christ or the Trinitarian God.  It often is extended to the idea that the nation-state will be more blessed by God if their leaders make regular announcements in an official capacity about the theistic basis of the nation.  Or if they make and call for official prayers, or if children in government schools are asked to recite theistic prayers.

In our country, a broad definition of ‘Christian Nationalist’ has sometimes included people who aren’t all that Trinitarian, but have accepted the ‘Christian’ label as something like ‘Someone who believes in God and isn’t Jewish’.  More about that below.

While a political entity can have laws that are more or less just in God’s eyes, I hold that political entities do not have a formal relationship with God in the New Covenant era.  In my opinion, that means – while the laws might favor one ethical system over another – they should not favor one religion over another.  For example, the standards that apply to building and zoning for Christians are the same ones that should apply to Muslims as well.

What about ethnicity and culture?  Some cultures have been more strongly influenced by Christian values than others.  Nevertheless, one is not saved by being a member of that culture.  Nor is a Christian allowed to elevate membership in that culture to the equal of their membership in Christ, nor to make too close a link between them.

And it can get uglier.  Some Christian Nationalists – not all by any means – are really ‘White Christian Nationalists’ and even worse, they may be using ‘Christian’ in the old- fashioned sense [which I find extremely offensive] of ‘Not Jewish’.  But they are a sub-category, and regarded, quite rightly, by most Classical Christians as cultic.

The major ‘Christian Nationalist’ issue that I have not supported is the one called ‘prayer in public schools’.  I do not believe that God is particularly impressed by homeroom recitations of this sort in government schools.  I do believe that, insofar as the government has an interest in an educated citizenry, assistance and support needs to be given to all children and not just those who attend government schools.  [Whether we can ever do without ‘public schools’ altogether, I don’t know.  Not in my lifetime.]  But since I am not a Christian Nationalist, I would say that government must support parents who wish to educate their children in a school of any religion and not just Christianity.

I do not support abortion ‘rights’ in most cases.  Most Christian Nationalists would take the social conservative track on that issue also.  It is an issue of the Second Table.

However, a Christian Nationalist would be more likely to believe than I would that, if we somehow got rid of Roe vs. Wade and similar jurisprudence, that God would somehow shower new special blessings [whether material or spiritual] on our country, whatever those blessings might be.  I don’t think like that.

On the other hand, some of the non-Christian ‘alt-right’, as I may explain in a future post, may actually support abortion ‘rights’, especially for people of color and ‘overpopulated’ parts of the world.  They have always been sort of an underground in our country.

I am not an enthusiast for same-sex marriage, especially if they contrive to discover it in a constitutional amendment enacted in 1868!  Christian Nationalists would take the same stance, I suppose, but they would be more likely to believe that if somehow we got rid of same-sex marriage, again, that God would shower blessings of some kind on our nation.  I’m not supporting efforts to overturn Obergefell, the decision that declared same-sex marriage a constitutional ‘right’, outrageous as that was; Obergefell is not about the taking of human life!  But I want the true church to stand firm on the definition of ‘holy matrimony’, as between two people of the opposite sex, not to be broken except for the gravest reasons.

However, ‘holy matrimony’ has been very different from government ‘marriage’ ever since no-fault divorce – on demand of one partner – became available 50 years ago.  And the Religious Right, I think, failed to make an issue of easy divorce, which has damaged a lot more people than ‘gay marriage’ ever will.

I can even accept a Christian supporting same-sex government ‘marriage’, as many younger Christians probably do.  But I believe it is heretical for it to be recognized and validated in the church.

On the overall issue of ‘legislating morality’, I will first point out that if we stripped everything that is moral from the law, all we’d have left is crony capitalist favors and tax breaks!  “Thou shalt not commit murder” and “thou shalt not steal” are in the Bible; are we going to argue that laws against robbery and murder violate the ‘separation of church and state’?

Let me try to approach this from another direction.  Suppose a Muslim regime took over America, or California.  If they tried to put limitations on the Christian church’s ability to worship and witness [as I admit they usually do] it would be a violation of my religious liberty.  On the other hand, if they allowed Christians to worship freely, and even permitted conversion, bringing Muslims to Christ, but at the same time outlawed pork, that would not be a religious liberty issue.  I like bacon, but my faith doesn’t require me to eat it.  That’s why outlawing it would not be a ‘religious liberty’ issue or a ‘rights’ issue at all.

Regarding sexual issues, Christian Nationalists have similar views to other social conservatives, but again they are more likely to believe that God will curse or bless the nation as a whole based on our performance in these matters.

I don’t accept ‘sexual freedom between consenting adults’ as a civil right, nor will I affirm that all laws questioning that are wrong or unconstitutional in principle.  Many of such laws may be imprudent [remember Prohibition?], or hypocritical in that they focus on sins that 95% of people aren’t tempted to, like homosexual activity; or unevenly and selectively enforced, as on the poor and communities of color, as many other laws regrettably are.  I would not crusade too hard for such laws.  [Abortion is not a sex act, but the taking of a human life.  It is in a different category.]

I am not a strong advocate of Sunday closing laws, but I would support laws stating that neither an employee nor a contractor could ever be required to work seven days a week.  So I accept, in that sense, that the state may enforce a sort of ‘sabbath’ as a day of rest, but can’t make us go to church.

Christian Nationalists may sometimes be open to more anti-immigration ideas.  I am open to some restrictions on immigration on, I think, mainly economic grounds.  I’m also open to the idea that we don’t need more immigration of unskilled labor, and that we can enforce our borders.  Higher skilled workers should not be brought in under H1-B visas that make them de facto indentured servants to the company that brought them in.  I even think that ‘birthright citizenship’ should be altered, perhaps by taking a different interpretation of ‘born under the jurisdiction of the United States’ in the Fourteenth Amendment.

In any case, I regard these as economic issues, not social issues, and I don’t want to tie them to my ‘social conservatism’.  In 1994, I refused to support California’s Proposition 187.  I have problems with the ‘undocumented’, and wouldn’t knowingly hire one.  On the other hand, I feared that the Republican Party would shift from being a ‘socially conservative’ party into a white ethnic party, in a state where non-Hispanic whites were not a majority.  And that is in fact what happened.

And, we must never forget that black and Latino votes put Proposition 8 over the top in 2008, while it actually lost among the Anglos and Asians.  I for one will never forget!  It is noteworthy that some forms of Christian Nationalism actually do include white identity, while many others do not.  But lumping people of color together with ‘sexual minorities’ is not helpful.

So why am I not a Christian Nationalist?

‘Christian Nationalism’ was not much of a factor when I was being discipled into the faith in the 1970s.  If anything, the primary Christian concern was world missions, and missionaries were sincerely trying to bring the Gospel, not ‘Americanism’, to the unreached world.  I went to graduate school at a school run by Wycliffe Bible Translators.  They were very clear in stating that they worked through overseas governments, whether democratic or kleptocratic, and they regarded all as being ‘ordained by God’.  They were presenting the Holy Scriptures, not the Bill of Rights of the United States.

Meanwhile, Bill Gothard’s Institute of Basic Youth Conflicts [Hint:  the youth should lose the conflict] had no element whatsoever of patriotism or Christian nationalism, whatever its other controversies.  And my wife grew up in the General Association of Regular Baptists – a ‘fundamentalist’ denomination if ever there was one –  with a few cultural legalisms.  She testifies that ‘God and Country’ or ‘Christian Nationalism’ were not, at that time major forces in her denomination.  So evidently it is quite possible to be ‘evangelical’, or even ‘fundamentalist’, without claiming a Christian Nationalist identity.

America was founded in the late 18th century by a coalition of, on the one hand, some real Christian believers, and on the other hand, Unitarians and Deists.  Still, at that time, the founders accepted an ethical system similar to the Christian one.  And most of the nations of the Western world had their legal systems formed under Christian influence; there was nothing exceptional about America in this.  More to the point, we all have many identities, and that’s not a bad thing.  However;

And that brings me to the famous verse 2nd Chronicles 7:14:   “If my people, which are called by my name, will humble themselves and pray, and seek my face, and turn from their wicked ways, then will I hear from heaven, and will forgive their sin, and will heal their land.”

Christian Nationalists claim this as a promise for the United States.  But I believe that if that promise has any relevance in the New Covenant, it is for the Church.  It is for the people who are called by God’s name.  It is not, absolutely not, about America.