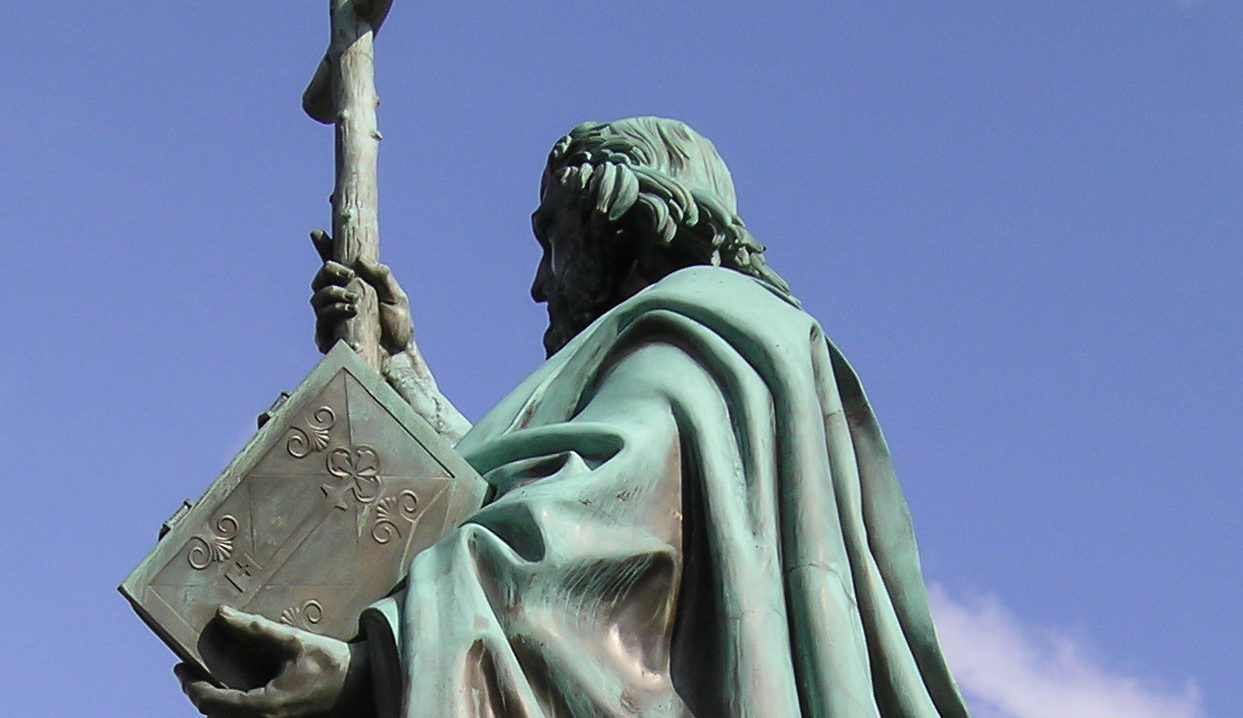 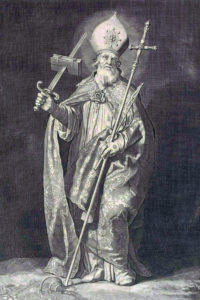 Saint Boniface was born about 675 in Anglo-Saxon England.  He was initially named Winfrid by his prosperous and respected family.  At an early age he attended a monastery school, and as a young man he became a monk.  The Pope later commissioned him to go to Germany as a missionary and gave him the more Latin name, Bonifatius.

A well-known story about Boniface recounts that he chopped down a sacred tree near Fritzlar, Hesse.  It seems that when the local gods didn’t immediately strike him dead for doing that, the amazed local people converted to Christ.  [The act was not as dangerous as it sounds, because that part of Germany was already under occupation by the officially Christian Frankish Empire.]

However, on June 5, 754, Boniface ventured into Frisia, beyond the reach of the Frankish Empire and was killed by local marauders.  He is regarded as the Apostle and Martyr-Saint of Germany for his leading role in bringing the Gospel to the German nations.  The anniversary of his death, June 5, became his saint’s day.

It is an interesting fact that D-Day [the invasion of Normandy code-named ‘Operation Overlord‘] was originally scheduled for June 5, but bad weather led to its being postponed until June 6.  If storms had continued one more day, because of the tidal conditions required for the landing, the invasion would have to have been put off until June 18-20 when the tides were right again.

Had that happened, the allied troops would have been forced to stay in their bunkers for two more weeks.  That would have increased the risk of careless talk about the invasion leaking out and the secret plan being exposed.  As it was, a much larger storm struck the coast on June 19-22, well after the Allies had a safe enclave in Normandy, with the invasion underway.

I can’t help but wonder if anyone in 1944 thought about the fact that June 5, the original day for the landings, was St. Boniface Day.  It would have been very appropriate.  Boniface was an Englishman who brought the blessings of the Gospel to Germany.

Gen. Dwight Eisenhower, the Allied Commander, in his message to the troops, declared, “You are about to embark on the Great Crusade . . .”  Later, he wrote a book about his years as Supreme Commander of the Allied Forces in Europe, titled Crusade in Europe.

As Boniface, an Englishman, went forth to Christianize the German people, so three mostly English-speaking nations [Canada, Britain, and the United States] landed in Normandy to crush the Evil that had arisen 1200 years later among the German people.

It seems an amazing coincidence, if nothing else.