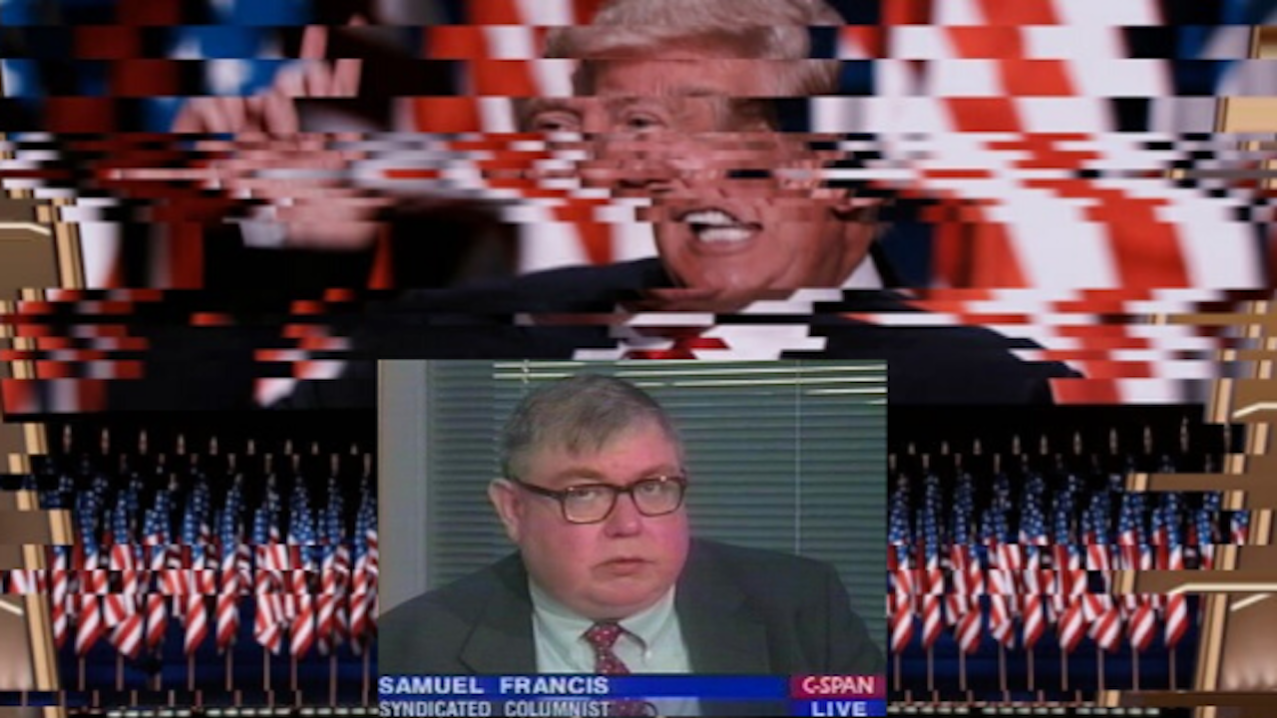 This post highlights some quotes from paleoconservative Sam Francis in order to show his foresight for understanding the rise of Trumpism, which has been noted by various writers, especially Michael Brendan Dougherty.

The rise of Trumpism was foreseen by a ‘paleoconservative’ or ‘proto-alt-right’ writer named Samuel Francis in a March 1996 essay, “From Household to Nation: The Middle American Populism of Pat Buchanan” published in Chronicles: A Magazine of American Culture.

I note some of his quotes that surely animate Trumpism:

The significant polarization within American society is between the elites, increasingly unified as a ruling class that relies on the national state as its principal instrument of power, and Middle America itself, which lacks the technocratic and managerial skills that yield control of the machinery of power.  Other polarities and conflicts within American society—between religious and secular, white and black, national and global, worker and management—are beginning to fit into this larger polarity of Middle American and Ruling Class.  The Ruling Class uses and is used by secularist, globalist, anti-white, and anti-Western forces for its and their advantage.

At the time, Francis was writing in praise of Pat Buchanan’s ability to clearly adopt “the central message of the Middle American revolt” in his run for the presidency.

Buchanan thus seems to share the perception that the fundamental polarity in American politics and culture today is between a deracinated and self-serving Ruling Class centered on but not confined to the central state, on the one hand, and Middle American groups, on the other, with the latter constituting both the economic core of the nation through their labor and productive skills as well as the culturally defining core that sustains the identity of the nation itself.  The economic interests as well as the cultural habits and ideologies of the Ruling Class drive it toward globalization—the managed destruction of the nation, its sovereignty, its culture, and its people—while those of Middle Americans drive them toward support for and reinforcement of the nation and its organic way of life.  The implicit recognition of this polarity by the Buchanan campaign places him firmly on the side of Middle Americans more clearly than any other political figure in the country today.

Francis’ main critique of Buchanan in 1996 centered around whether Buchanan was too loyal to the GOP and to the claims of establishment conservatism:

By making his bed with the Republicans, then and today, [Buchanan] opens himself to charges that he’s not a “true” party man or a “true” conservative, constrains his chances for victory by the need to massage trunk-waving Republicans whose highest goal is to win elections, and only dilutes and deflects the radicalism of the message he and his Middle American Revolution have to offer.  The sooner we hear that message loudly and clearly, without distractions from Conservatism, Inc., the Stupid Party, and their managerial elite, the sooner Middle America will be able to speak with an authentic and united voice, and the sooner we can get on with conserving the nation from the powers that are destroying it.

Because Sam Francis died in 2005, he never got to see his ideas in action in the form of Trumpism.  But in 2007, Michael Brendan Dougherty wrote a detailed profile of Francis, “The Castaway,” illuminating the biography and intellectual journey of Francis’ views, along with his divided legacy:

The paleoconservative movement he helped shape has distanced itself from Francis’s most radical ideas. Though Chronicles and the American Conservative still decry our elites and advance some of the same positions Sam Francis promoted — immigration restriction, non-interventionism in foreign policy, the extrication of America from transnational institutions, and a revived American nationalism — these magazines do not pine for a Middle American Revolution.  Paleoconservatives talk about race, but they do so in the way of Charles Murray or 1970s Commentary.  Their writings do not emanate hostility or bitterness, as Francis’s often did, toward American blacks and Hispanics.

In January 2016, Michael Brendan Dougherty went on to write for The Week, “How an obscure adviser to Pat Buchanan predicted the wild Trump campaign in 1996.”  Dougherty shows how Trump is both successful in the Republican Party yet also frightens its establishment.  David Brooks also picks up a similar theme in 2017 in his reflection of how Francis shapes the Trumpian mind.  Moreover, it might not be possible to fully detach Sam Francis’ political worldview from the white nationalism, which the The New Republic has noted over the years

Michael Lind’s 1995 book, The Next American Nation: The New Nationalism and the Fourth American Revolution, offers a more compelling critique of globalism than Sam Francis.  Lind’s perspective is also aware of the failures of white nationalism on the Right and the Left; an important advantage that should not be lost on my readers.

I have written about Lind’s work over the years, especially regarding his timely essay, “The Coming Realignment,” published in The Breakthrough Journal, where he writes about “cities, class, and ideology after social conservativism.” Lind’s forthcoming 2020 book, The New Class War: Saving Democracy from the Managerial Elite, looks to be both an important extension of The Next American Nation and some of his recent writings from American Affairs.  And in a recent and wide-ranging interview with Ezra Klein, Klein refers to Lind as “what a smarter Trumpism sounds like,” even though Lind does not consider himself a supporter of Trump per se.

Perhaps the future of Trumpism, at least as a coherent worldview, is marked by tensions between the approaches of Francis and Lind.