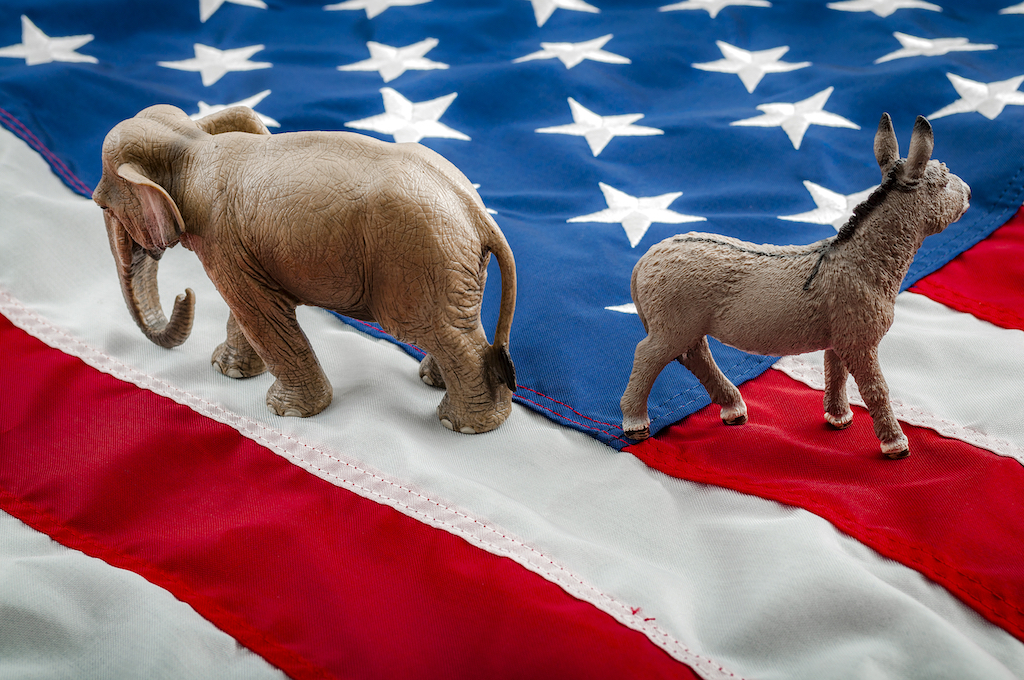 The little known [in the States] Canadian sociologist Michael Adams has suggested a new classification of American values, in terms of a four-way box.  The culture wars of the era after Nixon and before Trump were primarily between the Status and Security corner [which I call the Pharisee corner] but true Christian values lie in the Authenticity and Responsibility corner [which I call the Jesus corner] and the fastest growing segment, very different from the hippie ethos of 50 years ago, is the Survival corner, which I called the Bling corner.  I thought that the Survival corner was not very political, but Trump proved otherwise, I think.  And more extreme than Trump, there is now the so-called Alt-Right.

Comparing Woodstock ‘99 to the original one in 1969 makes me think of the work of  Michael Adams.

Michael Adams’ 2005 book, American Backlash: The Untold Story of Social Change in the United States, got little attention in the States.  In fact, since he is a Canadian author, only used copies can be found on the regular amazon.com, whereas new copies can actually be found on the Canadian version, amazon.ca.  I found Adams’ work in the footnotes to the original Break Through: From the Death of Environmentalism to the Politics of Possibility book by Michael Shellenberger and Ted Nordhaus, who maintain a site we often refer to at this blog.

Adams’ analysis cuts across not only the traditional ‘left’ vs. ‘right’ but even the newer spectrum of ‘libertarian’ vs. ‘populist’.  His company polled Americans on a broad spectrum of values, ranging from “Father should be head of the household” to “Violence is sometimes useful” to “look good feel good” to “just deserts” and other such values that do not always have an obvious connection to politics or theology.  I have tried to reproduce his basic diagram below. 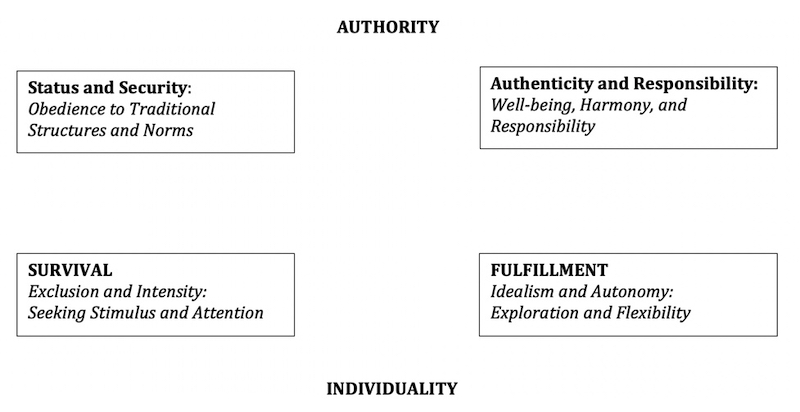 The capitalized words are meant to be the sides or dimensions of the diagram, and the lower case a description of the quadrants.

The concept of ‘fulfillment’ is a complex one.  And the significance of Adams is that he does not put it as the polar opposite of ‘authority’.  I will have to quote Adams himself (p. 51),

Although the values at the right side of the map are organized around personal fulfillment, the principle at work here is not mere selfishness.  In this area of the map, the individual quest for meaning is prized, not just the individual quest for pleasure or gain.  And whether personal meaning is derived from traditional, authority-oriented sources at the top of the map or more flexible, idiosyncratic sources at the bottom, “meaning” is a deep and genuine quest.  It may not unfold along a traditional religious course, but it does seek to construct an authentic framework that encompasses pleasure, morality, community, and spirituality.  The right side of the map—even  the bottom right—is not home to the ‘if it feels good, do it’ crowd that so distresses moralists.

I have not been able to resist giving my own names to these quadrants.  I tend to think of the upper left corner, Status and Security, as the Pharisee or Traditionalist corner; the upper right, Authenticity and Responsibility, as the Jesus corner, because it seems to me that the values of true Christians concentrate in this corner [one of Adams’ values that he situates in this corner, for example, is called Everyday Ethics], and the lower right corner, Idealism and Autonomy, the Progressive corner, for it illustrates the values of so-called ‘progressives’ and the predominant values of what I call the New West countries, Canada, and Northwestern Europe.  I am tempted to call the lower left corner the Gangsta corner, but maybe I should call it the Bling corner.

The New West may be in the Progressive corner, but the USA is not really part of the New West, and its growing corner, especially among the younger generations, is the one I have called the Bling corner, which contains such values as Just Deserts [those who are not doing well deserve it], Ostentatious Consumption, Racial Fusion, Acceptance of Violence, and Sexual Permissiveness [you might expect to find that one in the Progressive Corner, but what is there is Flexible Families, a willingness to accept cohabitation and same sex families without imposing a traditional definition].  The Gangsta corner also includes Pursuit of Intensity, Attraction to Crowds, and Penchant for Risk [both as a necessity of life and as a thrill].  Other values toward the Survival side of this quarter are Ecological Fatalism and the general belief that there are winners and losers in a society, and “too bad, so sad,” as a friend of mine puts it.  More toward the middle of this section are Ostentatious Consumption, Crude Materialism, and Need for Status Recognition.  Adams tells us that one American show he really enjoys watching is Pimp My Ride.  And while Exclusion and Intensity, in general, is contrary to Christian values, Adams speculates (p. 32) that one reason for the growth of spectacular megachurches “is the sheer ecstatic thrill of worship services-with rock bands, plasma-screen displays accompanying live performances . . . and hundreds upon hundreds of fellow singers, prayers, worshippers, shouters, and spectators.”  Actual trust in institutions like family, church, and state has declined (p. 45).  As for Violence, for all the increase in Acceptance of Violence, Adams concedes (p. 27) that actual crime rates are falling; perhaps the value of Acceptance of Violence is only when it is useful to advance one’s interests.  At the same time, other values that are decreasing are the fairly New Agey or 1970s liberal ones like Introspection and Empathy, Spiritual Quest, and Personal Expression [which means, “To develop my personality and be able to express it better” (p. 52) in other than a consumption-oriented way.

This book was published right after the 2004 elections, and its information about trends is from the period 1992-2004.  Adams tells us that while during most of the period the movement of American values was toward the Exclusion and Intensity quarter, there was a slight movement northwestward toward the Status and Security corner between 9/11 and the publication of the book.  He didn’t know where it was going to go from there.  I have not attempted to access data from his organization about all these things for the ten years since 2004.  My own suspicion is that the blows of Katrina in 2005, and the Great Crash of 2007-08, have now trumped the American mind [except, as I have said before, 9/11 strengthened the Progressive opposition to Traditional Values and Norms, because it was carried out by Islamists who could be seen as having an extreme commitment to Traditional Values and Norms].

It is not certain what the political impact of these movements is.  Political culture wars are still fought out between the Pharisee and Progressive quarters, largely, it turns out, because those whose values are dominated by the Bling quarter don’t vote much, even though one sees attempts by Republicans [who generally represent the Status and Security corner] and Democrats [the whites of which represent the Idealism and Autonomy corner, the blacks and Latinos I would argue less so but they believe in the Progressive definition of Fairness, as Jonathan Haidt would put it].  Charles Murray has written, in his work Coming Apart, about how working class whites, as the standard of living declines, have started behaving in ways similar to those for which the inner city is notorious.

Adams concedes that the Democratic Party is a broad coalition, whereas the Republicans are fairly united on values.  And Adams argues that in all three groups, white, African American, and Latino, people over sixty [which, in the year I write, is people over seventy] have distinct values but the younger people are sliding slowly into the Bling corner.

Adams ends his book with a brief speculation on the 2008 election, rather amusing in retrospect.  He is sure that the natural nominees are Hillary Clinton and Jeb Bush!  As for their running mates, the logical running mate for Jeb Bush is Condoleezza Rice, and as for Hillary, “she’ll need on her ticket a Real Man with gravitas . . .  to serve as her avuncular Dick Cheney, and if like New Mexico governor Bill Richardson, this real man can also boast some Latino heritage, so much the better.  Barak [sic] Obama, the dashing, smart, and eloquent hit of the 2004 Democratic convention, may have to spend a little more time on the vine before a bid for higher office.” (p. 174)  Wrong!!

He seems to be mostly interested in American politics, as he ends saying “my report on this research is intended not just to enlighten but to lighten the discussion of social change in America, which from my perch atop Toronto’s CN tower seems all too mean and divisive, albeit exciting.  The culture war over values in America, as my analysis shows, is overblown; the so-called red and blue Americas have a lot more in common with each other than they do with the plurality of Americans who are disengaged from their political system.” (p. 174)  But the drift into the Bling quarter is clearly not mostly being felt in politics, for those whose values are in that quarter don’t vote.  So the politicians are not going to pay a lot of attention to it.  The advertisers will, the writers of music and film will, and you’d better believe the Church had better be concerned about it.  How will the Church deal with it?  Certain aspects of megachurch liturgy, as he already said, are probably appealing to the Bling people’s need for stimulation, and the ‘health and wealth’ heresy that is infecting some portions of the Pentecostal-charismatic world [not all, by any means, especially the wealth part] may be an effort to pander to these values.  I, of course, would not recommend this approach to any orthodox church!

An Addendum: It occurs to me that Michael Adams also anticipates Trump.  However, when I wrote this essay in 2014, I thought the people on the lower left corner [‘SURVIVAL’] weren’t going to turn out to vote.  Therefore the culture wars between the upper left [‘Status and Security’] and lower right were going to continue [‘FULFILLMENT’].  I may have been wrong.