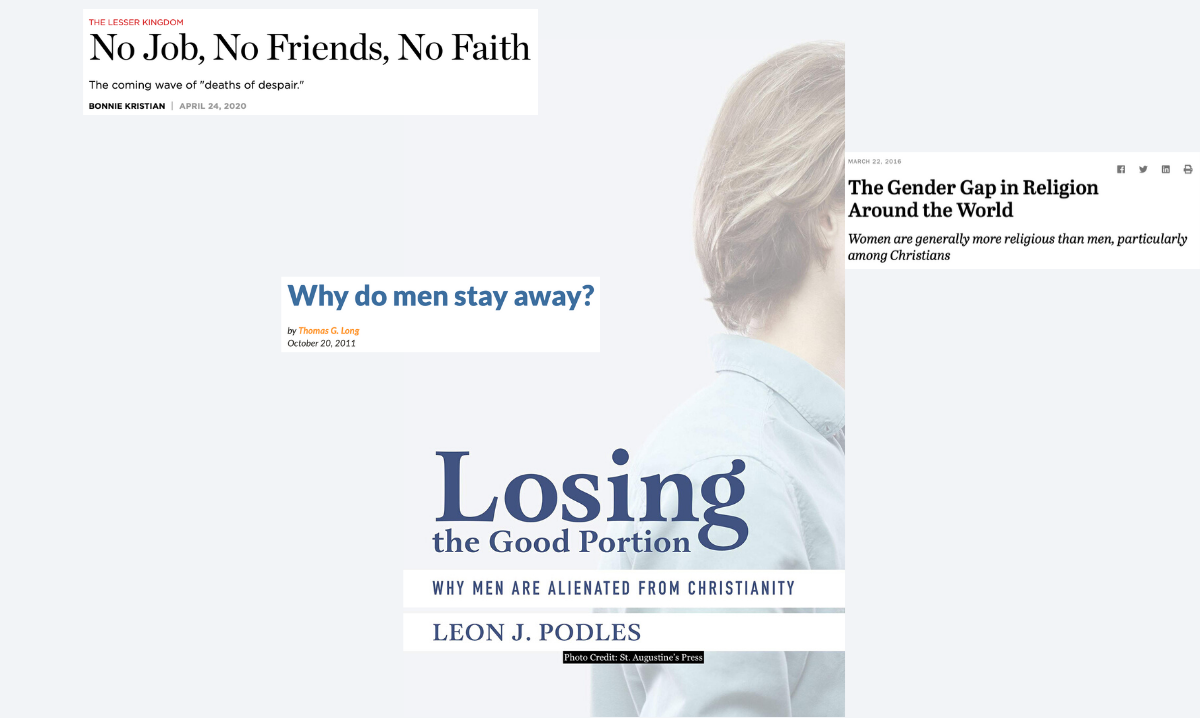 There have been claims throughout the history of Christianity that portions of the Church were excessively feminized.  Though author Leon Podles is a Catholic himself, most of the space in his book, Losing the Good Portion: Why Men are Alienated from Christianity, is devoted to particular problems in the Catholic church.  He claims that the problem started in the Middle Ages, with St. Bernard’s promotion of ‘bridal mysticism’ in the 1100s.

Anyhow, ‘bridal mysticism’ adopts the statement of St. Paul that the Church is the Bride of Christ, and the allegorical interpretation of the Song of Solomon, to develop a highly erotic concept of a person’s relationship with Christ.  One can see where a red-blooded male might be uncomfortable with this.  The Church is indeed the Bride of Christ [and I am willing to let the Virgin Mary stand as the representative of the Church, just as Jacob is the iconic representative of the people of Israel].  However, the Church is not the Harem of Christ, to coin a phrase.  I am fine with God the Father as my Father, and Christ as my Lord and Big Brother.

Podles begins with a fairly typical analysis:  masculinity, unlike femininity, is in some sense acquired, and many cultures have an initiation ritual into adult male-hood that often involves physical challenges and a formal separation from the mother.  Because they fear falling backward out of their masculine status, they seek honor, and they wish to impress other men by their risk taking and superiority in feats and in ability to tolerate pain.  Indeed, as I would put it, females are the gender of child-bearing and males that of cross-bearing.

There are so many themes in the book that I will not mention them all.  But there is one major theme that dominated in many Roman Catholic cultures for a long time.  That is the distrust between clergy and male laymen.  The clergy distrusted male confraternities, however formally Catholic, that they could not control.  Meanwhile, the laymen believed that the priests were getting confidences from their wives and other women in the confessional.

In such cultures few lay males attended church.  The most astounding fact I found out from Podles was that when the vote for women became an issue at the end of the nineteenth century, it was the religious conservatives in Catholic countries that pushed for the vote for women, and the anticlerical ‘left’ that opposed it.  That is quite different from what we would ever expect today, accustomed as we are to hearing the church criticized as a ‘patriarchy’.

Liberals and radicals therefore were hesitant to give the vote to women, for they feared that women would be governed by the clergy.  In 1907 Georges Clemenceau opposed letting women vote because, he wrote, ‘the number of [women] who escape the domination of the clergy is ridiculously low.  If the right to vote were given to women tomorrow, France would immediately jump back into the Middle Ages’.  Pope Benedict XV was of the same mind, although he would have put it differently, and in 1919 he came out for women’s suffrage. [pp. 141-42].

Anticlericals in those days were also different on another issue.  Podles informs us

French anticlericals in the nineteenth century disliked both priests and homosexuals, and associated the two.  In this they followed Voltaire, who, when he mentioned the clergy, would usually insinuate an allusion to pederasty.  Anticlerical novelists blamed seminaries for producing homosexuals.  Parish priests, with their easy access to women, provoked envy among anticlericals; by contrast, religious, shut up in schools and monasteries, were accused of pederasty and homosexuality. [p. 124]

Protestantism started out partly as a reaction to clerical celibacy, and to clericalism in general, but by the nineteenth century, we are informed,

The Whig Sydney Smith had observed that there were three sexes, ‘men, women, and clergymen’, and this witticism about a ‘third sex’ became a standing joke.  All clerics had to face the ‘popular stereotype that men of the cloth were neither male nor female.’  The clergy were seen as exempt from masculine trials and agonies; they were part of the safe world of women.  As one layman put it, “life is a football game, with the men fighting it out on the gridiron, while the minister is up in the grandstand, explaining it to the ladies.” [p. 127].

But is all this a necessary consequence of the Gospel?  There are other ways of looking at this, Podles says.  First, in many cultures boys have to go through a tough initiation in order to be declared ‘men’.  “Boys have to die to their old nature,” Podles writes, “often through a violent initiation and be reborn as men.  Regeneration, the second birth, was also central to Christianity:  in baptism a person dies with Christ and is reborn as a new creature.” [p. 174]  If anything, Christianity expands this death-and-resurrection trope to women.  And St. Paul dared to suggest that there were similarities between the training of an athlete and Christian training in self-control.  And was not martyrdom the ultimate bravery?

Certain aspects of the fundamentalist and evangelical movements, it seems, were reactions to the ‘feminized’ pastorate of the mainline.  There is a reason why we classical Protestants nowadays call our full-time leaders ‘pastors’, not ‘ministers’, a word too associated in our minds with the third-sex culture of the mainline.  And an eccentric Victorian character named Charles Kingsley [1819-75], a pastor but also a friend of Charles Darwin, promoted ‘muscular Christianity’.  The post-World War II renewal of institutional evangelicalism paid a lot of attention to sports with such as Fellowship of Christian Athletes and Athletes in Action.  In fact, when I was considering the faith in the early 1970s [before the Jesus Movement set in], I actually wondered whether the Church had a place for nerdy and unathletic people such as myself!

I don’t feel that way now.  If anything, I think my own generation, the Boomers, leaned toward a highly erotic spirituality.  It is my generation, I fear, that gave us what I call ‘Jesus is my girlfriend’ lyrics in worship music.  And large sections of the classical church began to replace talk of ‘faith in Christ’ with talk of ‘relationship with Christ’.  We do have, in several senses, a ‘relationship’ with all three persons of the Trinity.  But I doubt that to practically replace ‘justification by faith’ with ‘justification by relationship’ and make the R-word our shibboleth was not, to me, an advance.  Plus that kind of rhetoric perhaps had greater appeal to women.

The local church I attend now does not feel very feminized.  And I think in general, the problem is not as serious today for the church as it has been in some past eras, say 120 years ago.  But it is not something to be complacent about; we have to be careful that our Gospel doesn’t get too touchy-feely and feminine-sounding.  And there is another possible reason the gender balance in our churches seems better—maybe masculinized women are leaving.

And all the more in the current environment of whatever wave of feminism this is, in which women want to be more like men!  Podles announces, “The gap between men and women in church participation is narrowing in some highly secularized milieus, but not because men are becoming more active.  Women are beginning to reject the traditional model of femininity as a form of infantilization. Meanwhile, as women enter public life, they tend to adopt masculine attitudes, including the masculine suspicion of religion.” [p. 244]  The takeover of the ministry by women in many mainline denominations, he says, is not reassuring to this kind of woman [p. 247].  Perhaps if the church is equally accused of being feminized and of being male chauvinistic at the same time, we are in the right place!