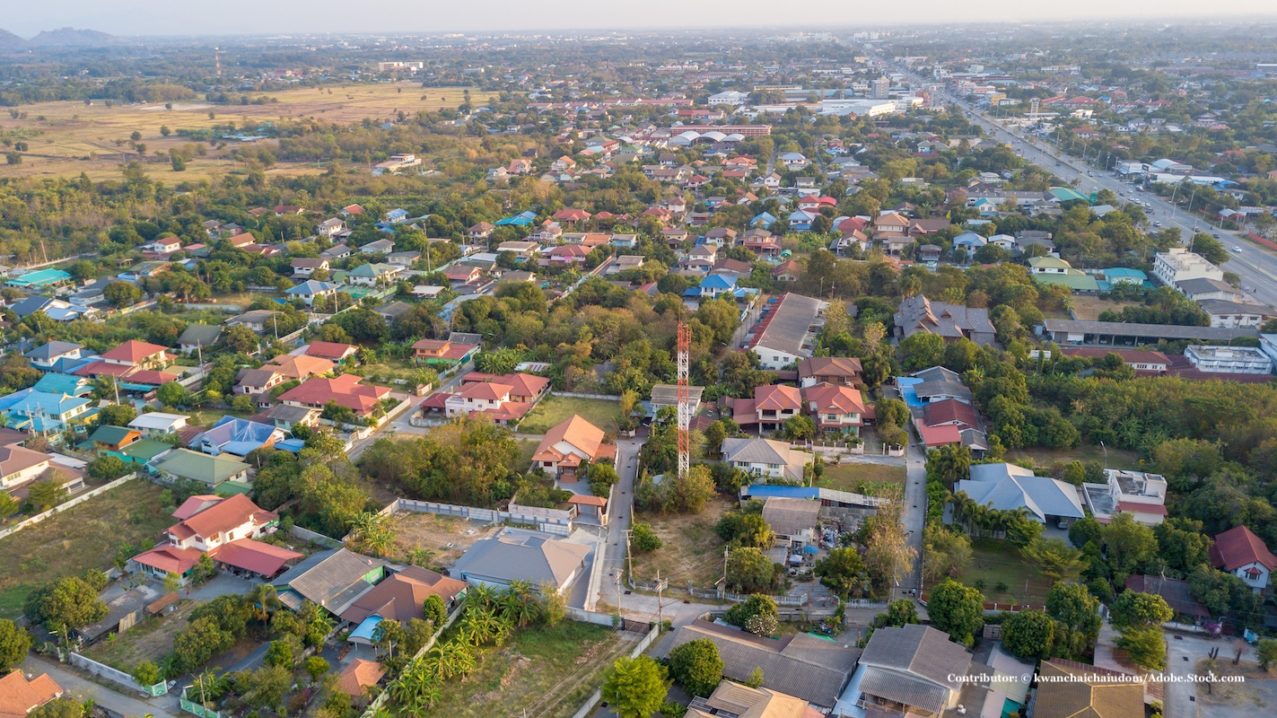 I have attempted to think through the implications of the teaching of the Scripture, and of the Christian faith, for land use and land use law.  One issue for me is that a lot of land use law in our country is based on a not very Christian concept of who are ‘undesirable neighbors’.

The event that first triggered my interest in land use was the Orange County Rescue Mission affair.

After I became a Christian in 1973, in my early twenties, I lost interest in politics for a while, because there were new spiritual dimensions of reality to investigate and map.  But around 1978 something awakened my interest again.  That was the campaign in Santa Ana, California, to run the Rescue Mission out of town.

The city succeeded, in the name of ‘redevelopment,’ in getting the mission out of its old downtown location.  It landed in an industrial district slightly over a mile to the west.  However, a fight ensued because of a nearby residential neighborhood, which was Latino and was in no sense posh.  Still, when the then-director of the mission unfolded a map in front of the activists and declared, “Show me one place in the city where you’re not going to fight me,” the leader answered, “No.  If we lose, we win.”  By that he meant that he would be awakening the consciousness of the ‘People’ and giving them something to be outraged about.

I can only assume he had been influenced by the late Saul Alinsky.

As I began to think about land use, I turned to the Bible, which definitely upholds private property when it says “Thou shalt not steal.”  There is no real estate law, as such, in the New Testament.  However, there is an entire chapter about real estate law in Leviticus 25, which applies to a specific covenant nation [which we no longer have] assigned to a specific geographical location.

According to that legal system most land cannot be sold permanently, but only till the next Jubilee, which happens every 50 years.  After that, the land returns to the original owner.  [It was apparently assumed that the main motive for selling land was financial pressure.]  Meanwhile, within the walls of non-Levite towns, the seller had one year to change his mind and buy the property back at the same price he’d paid for it.  If he did not choose to exercise this right within a year, the land changed hands permanently.

There seems to have been no provision for a) urban expansion, or how land got converted from rural law to urban law, or b) a rural person deciding to settle permanently in a city; he could not permanently unload his rural land assignment.  Of course, we don’t know how long these laws were actually observed.  But as late as the time of Elijah, we have the story of Naboth’s Vineyard in I Kings 21, I Kings 22:37-38, and 2 Kings 9:21-26 and 30-37.  This indicates that rights of property sometimes stand against the state as well.  Justice requires that people-in-charge must not be allowed to use the state to steal.

Apart from biblical history, in village communities across the world, people did not ‘own’ their land, but were assigned it by the village elders [I have a recent post on this in Africa].  A similar policy was used in the Russian mir after the abolition of serfdom in 1862.  In various places, where some farmland was of higher quality than in other locations, families were actually relocated every few years so different ones could take turns on the good land.  The least unjust version of this was probably the age-grade system, where anyone who survived to a certain age got to be a ruling elder, and thus a ‘ruling class’ did not develop.  But these examples are about farming communities, and no clear answer for urban life can be gained from them.  And I don’t know what happens in these kinds of communities when someone cashes out and moves to the city.

Because of the Orange County Rescue Mission episode, I came to realize that, if we are going to be concerned about ‘government’ and land use, we must be concerned about all levels of civil government.  And City Hall and even Homeowners Associations are ‘government’.  I suppose I will go along with many ‘conservatives’ and admit that local tyranny is a lesser evil, only because you don’t have to run as far to get out.  But if God cares about justice, he cares about it at all levels.

Christians are supposed to have a special interest in the poor, widows and orphans, the handicapped, and the like.  And they should have the right to use land in order to care for them.  [After George Floyd I might say that we can take a special interest in ‘people of color’—to the extent that they are more likely to be among the poor—and of race issues for that reason.  But when Jesus and the Bible talk about the poor, widows and orphans, the marginalized and the like, they don’t say ‘the poor of color’.  They simply say, ‘the poor’.]

If the poor and the marginalized are inherently ‘blight’, as was implied during the rescue mission controversy, so is the Church who cares about them and serves them.

I have every incentive to read the Bible because, while it warns of the dangers of wealth, it does not find the wealthy to be covenantally guilty as a class.  I, as a trustfunder, have a lot of privileges besides just that white one.  But I also have enough sins of my own without assuming group guilt for my financial status, my race, or my gender.  At the same time, I cannot assume that people who make more money are necessarily ‘better’ people than those who make less, or that they are necessarily more desirable neighbors.  Therefore, I cannot assume that keeping the price of housing high gives me more desirable neighbors.  The warnings of Deuteronomy 8 and 9 are to the point:

Do not forget that [God] led you through the great and terrifying wilderness with its poisonous snakes and scorpions, where it was so hot and dry.  He gave you water from the rock!  He fed you with manna in the wilderness, a food unknown to your ancestors.  He did this to humble you and test you for your own good.  He did this so that you would never say to yourself, “I have achieved this wealth with my own strength and energy.”  Remember the LORD your God.  He is the one who gives you power to be successful, in order to fulfill the covenant he confirmed to your ancestors with an oath. . .

After the LORD your God has done this for you, don’t say in your hearts, ‘The LORD has given us this land because we are such good people!’  No, it is because of the wickedness of the other nations that he is pushing them out of your way.  It is not because you are so good or have such integrity that you are about to occupy their land.  The LORD your God will drive these nations out ahead of you only because of their wickedness, and to fulfill the oath he swore to your ancestors Abraham, Isaac, and Jacob.  You must recognize that the LORD your God is not giving you this good land because you are good, for you are not – you are a stubborn people.

What does this have to do with American real estate law?  Much of our land use law is upheld in the belief that those who make more money and can afford better housing are therefore ‘better’ people than those who cannot.  And thus they should be protected from the ‘less good’ people by local public policy.  Yes, race has been an important part of this in the past, but race has never been all of it.

Francis Schaeffer commented in several of his works that the majority of the ‘Silent Majority’ [a term from the Nixon era that Trump has revived] did not really have Christian values but instead had two central values; ‘affluence’ and ‘personal peace’ [see his A Christian View of the West].  These values obviously dominate local politics, especially in the suburbs.  Schaeffer feared that these people would choose a somewhat authoritarian state that guaranteed them affluence and personal peace, over a ‘free’ society that did not.  I wish that in his last years, when he got involved with the Religious Right, that he had continued to hammer on this point.  It is one of his most important insights.

Chuck Marohn has observed that American towns start out as shack towns and improve over time.  And I think that is true in the rest of the world as well.  In the 20th century, however, we were taught that neighborhoods as well as houses are built from scratch and they are to be frozen in form by law, more or less in perpetuity.  Our culture says we have a right, not only to our home, but to the form of our neighborhood.  So, in some sense, our neighborhood is our castle.

Emily Badger writes about how this culture developed.  To some degree it may be inescapable in an urban community, where the value of property mainly derives from what is around it.  Even renters may have an interest in their neighborhood, hoping that their property values [and their rents] do not increase.  I for one doubt that this system can be broken.  It can probably be bent, like the proverbial arc, toward justice, but I doubt if it will break.  I have no easy or simple solutions.

The reader will hopefully be pleased to hear that the Orange County Rescue Mission has not only survived but prospered.  They have various houses and facilities in various places around the county and actually beyond [Corona, Riverside County] often at the invitation or welcome of local authorities.  They were able to seize on a good political moment to get control of a piece of the old Tustin Naval Air Station, where they have built an amazing facility called the Village of Hope.  So, their story is, in the end, a success story.  But their original crisis, 42 years ago, continues to shape to this day my views on land use law and the role of local government, and why local government matters.  It is one major reason why I have written this paper.